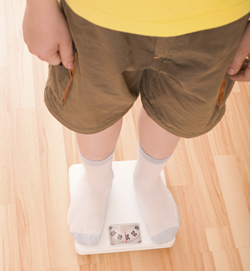 The White House Task Force on Childhood Obesity, created by the president as part of the first lady’s “Let’s Move” campaign, aims to solve the epidemic of childhood obesity within a generation, returning the country to a rate of 5 percent by 2030, which was the rate before childhood obesity first began to rise in the late 1970s.

In a recent U-M study, published online ahead of print in Obesity, researchers evaluated the balance of prevention and treatment required for achieving goals laid out by the Task Force’s May 2010 report.

To achieve this goal, researchers concluded that a shared emphasis on both obesity prevention and treatment strategies is required. Prevention programs alone cannot appropriately tackle the epidemic affecting children who are already obese, particularly minorities. Obesity treatment strategies need to be a key part of the equation.

“There is a lot of discussion about obesity prevention for children. That’s certainly important, but it’s not the whole story. Because so many children are already obese, there need to be greater efforts focused on treatment if we’re going to have success,” says Joyce M. Lee, M.D., M.P.H., assistant professor of pediatrics and communicable diseases at the U-M Medical School and a clinician at U-M C.S. Mott Children’s Hospital.

Rates of childhood obesity in the U.S. are much higher for minority children, with 20 percent of black and Mexican-American children affected, compared with just 15 percent for white children. Because the burden of obesity is already so high, prevention strategies alone will not help the task force reach its goal, the study concludes.

The study points out that recent legislation, including the Healthy Hunger-Free Kids Act of 2010, may help progress efforts to reverse the obesity epidemic. The act increased financial support for the National School lunch program, which offers free or reduced price meals to low-income students.

However, researchers say that the law may have a greater impact on preventing obesity in healthy children rather than reducing obesity in children already affected by obesity.
“It won’t be enough just to develop new, culturally relevant and effective treatment strategies focused on minority children. We must reduce the financial barriers to these treatment strategies for kids in low-income households, many of whom are from racial/ethnic minority groups,” says Lee.

Only ten states cover obesity-related nutritional and behavioral therapy offered through programs like Medicaid. However, given the number of disadvantaged children who are more likely to be obese, it’s critical that this coverage be available to all, authors say.

“The Health Care Reform Bill passed in 2010 may play an important role for providing coverage for obese children, as it will require new health plans to cover obesity screening and counseling for children,” says Lee.

The University of Michigan C.S. Mott Children’s Hospital is consistently ranked as one of the best hospitals in the country. It was nationally ranked in all ten pediatric specialties in the U.S. News Media Group’s 2011 edition of “America’s Best Children’s Hospitals” including third in the country for heart and heart surgery. In November, the hospital moves to a new 1.1 million square feet, $754 million state-of-the-art facility that will be home to cutting-edge specialty services for newborns, children and women.

Founded in 1998, U-M’s CHEAR Unit is a national leader in the analysis of the American health care system and the organization and financing of care for children. Since its inception, the CHEAR Unit has been awarded over $40 million in research grants from federal, state, and foundation sources. The CHEAR Unit comprises core faculty from the Schools of Medicine, Social Work, Dentistry, Pharmacy, Nursing, Public Health, Business and Law. Multidisciplinary teams provide the structure for research of community, state and national child health policies, practices, and programs. There are more than 30 faculty affiliated with CHEAR.