Adults and adolescents often adjust their behaviour and opinions to peer groups, even when they themselves know better. Researchers from the Max Planck Institutes for Evolutionary Anthropology in Leipzig, Germany, and for Psycholinguistics in Nijmegen, Netherlands, studied this phenomenon in four-year-olds and found that preschool children are already subject to peer pressure. In the current study, the researchers found that children conformed their public judgment of a situation to the judgment of a majority of peers in spite better knowledge. (Child Development, October 25, 2011) 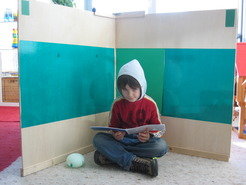 Humans do not only conform to arbitrary fashions but also to majority opinion even when they know better. This conformity plays a crucial role in the acquisition of one’s group’s behavioural repertoire. We learn group specific behaviour by observing other group members. When confronted with information that stands in conflict with our own beliefs or preferences, we often succumb to the point of view of the majority.

Daniel Haun of the Max Planck Institute for Evolutionary Anthropology and the MPI for Psycholinguistics and Michael Tomasello of the MPI for Evolutionary Anthropology analysed how pre-schoolers handle information that they acquire from peers. A total of 96 four-year-old girls and boys of 24 different kindergarten groups participated in their current study. “We wanted to know whether preschool children conform their opinion to the majority even if the latter is obviously in conflict with their own point of view“, says Daniel Haun.

In the first part of the study the preschoolers were tested in groups of four children each. They received seemingly identical books including 30 double pages with illustrations of animal families. On the left page were mother, father and child together, on the right only one of the three. The children were asked to identify the family member on the right. Yet, while the children believed all books to be the same, only three of the four books were actually identical, the fourth sometimes included the picture of a different family member on the right page. “The child with the divergent book was confronted with the – from his or her point of view – false but unanimous judgment of three peers“, Haun explains. „Out of 24 children 18 conformed at least once although they knew the majority response to be false“.

In a second study, the researchers investigated the motivation underlying children’s conformity. In this study, depending on whether a lamp was on or off, children were supposed to either say their answer out loud or to silently point to the correct animal. Consequently, only the adult observer, but not the other children could see the answer. Of 18 children 12 conformed to the majority at least once, if they had to say the answer out loud. Were they to point silently to the right answer, however, only 8 out of 18 children conformed to the majority judgment. The children thus conformed their public, but not their private, answer to the majority. This indicates that the conformity has social reasons as for example to avoid conflict with their peer group. Daniel Haun summarizes: “The current study shows that children as young as four years of age are subject to peer pressure and that they succumb to it, at least to some extent, out of social motivations”.