Home » Child health » Too much of a good thing? Kids in low-income families drink more juice than recommended

Too much of a good thing? Kids in low-income families drink more juice than recommended 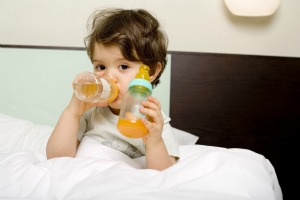 ANN ARBOR, Mich. – To help keep at bay health risks such as childhood obesity and early tooth decay, the American Academy of Pediatrics recommends limiting fruit juice in children age 1-6 to one serving per day.

A new report from the University of Michigan C.S. Mott Children’s Hospital National Poll on Children’s Health shows that many kids in low-income families are getting more than the recommended amount of juice.

The Poll asked parents of young children of all economic levels about their children’s juice consumption. Overall, 35 percent of parents report that their children 1-5 years old have two or more cups of juice on a typical day – twice the amount recommended by the AAP.

“It is important to limit juice consumption in young children because there is such a strong link between consumption of sugar-sweetened beverages and child health problems like obesity and early tooth decay,” says Sarah Clark, M.P.H., Associate Director of the Child Health Evaluation and Research (CHEAR) Unit at the University of Michigan and Associate Director of the National Poll on Children’s Health. “For many obese children, sugary beverages make up a large proportion of their daily energy intake.”

These findings are concerning, Clark says.

“Both childhood obesity and early dental problems are more prevalent in lower-income children, so the children we’re most worried about in terms of these conditions are also those who are drinking the most juice,” Clark says.

Some parents may encourage their children to drink juice because it can help their child receive the recommended servings of fruit consumed each day.

“Parents who give their child juice as a healthy alternative may actually be feeding them nearly as much sugar as soda.”

The Poll also found that 35 percent of lower-income parents said that their child’s doctor recommends juice.

“This is an important message for health care providers as well as parents,” Clark says. “Doctors need to be very specific in letting parents know that whole fruit is the best way to have a child get recommended servings of fruit and that fruit juice should be limited to no more than one serving per day for kids 6 years and younger.”

Data Source: This report presents findings from a nationally representative household survey conducted exclusively by Knowledge Networks, Inc. (KN), for C.S. Mott Children’s Hospital via a method used in many published studies. The survey was administered in September 2011 to a randomly selected, stratified group of parents age 18 or older with a child age 1 to 5 (n=606), from the KN standing panel that closely resembles the U.S. population. The sample was subsequently weighted to reflect population figures from the Census Bureau. The survey completion rate was 58 percent among panel members contacted to participate. The margin of error is ± 5 to 11 percentage points.