While the number of cases of HIV infection in Zimbabwe has been decreasing for some time, the circumstances of children who have lost both parents to the AIDS epidemic could worsen in the coming years, according to a simulation that modelled the population development of the African country from 1980 to 2050.

For a long time, the term “orphan” did not exist in Zimbabwe. When children lost both their parents, they were taken in and cared for by kin. But this changed as the AIDS epidemic, which started in the 1980s, orphaned more and more children. In 2006, an estimated 21 percent of children under age 18 had lost both their parents. Because the number of relatives who could assume custody of these children also declined over this period, they truly did become “orphans.” Now, Emilio Zagheni of the Max Planck Institute for Demographic Research in Rostock has conducted a study examining to what extent half and double orphans have been able to fall back on the kinship network, which in Zimbabwe has traditionally been ready to help in crisis situations. 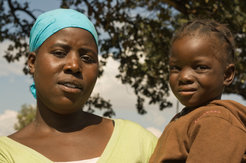 Zoom image
Fewer and fewer children who have lost their parents to the Aids epidemic find a new home with relatives.
© iStock

To investigate this question, the demographer modelled the development of a population typical for Zimbabwe from 1980 until 2050 with the help of a so-called microsimulation: 50,000 individuals were given certain probabilities of marrying, dying, or having a child. At the same time, they were assigned to the categories “HIV positive” or “HIV negative,” which in turn raised or lowered their chances of dying and affected the lifespan of the spouse or children. The numbers generated with the help of the simulation for the past and present are largely in line with the estimates of international organizations.

The numbers projected for the future do not, however, look promising. According to Zagheni’s projections, in 2020 only around six percent of children under the age of 18 will be double orphans. However, their fates could be far worse than those of today’s orphans: the hole that the AIDS epidemic has torn in the demographic structure of the county affects not just the parents’ generation, but also the grandparents’ generation. Thus, the simulation shows that, in the years 2020 to 2030, one in three double orphans (35 percent) will have to make do not just with no mother or father, but also with no grandparents.

Because traditionally other relatives, such as uncles and aunts, would provide the orphans with care and support, Emilio Zagheni has calculated an index of so-called kinship resources. In this index, each family member is given a weight equal to his or her relatedness to the child.

The closer the degree of relatedness between the foster child and the foster family, the better the child’s health care, educational, and financial situation is shown to be. Beween the starting point of the AIDS epidemic (1980=100) and 2015, the index decreases by over 40 points. The family network system, which had previously ensured that children were cared for and raised not just by the parents, but by close relatives, is under severe pressure due to the decimation of families. Currently, some households are led by older siblings, which is considered the first sign of the collapse of the traditional network.

It would therefore be desirable for the index of kinship availability presented here to be incorporated into the statistics of international agencies and to be taken into account by development aid organizations. The results could then be applied in a similar form to other sub-Saharan African countries that are also struggling with the effects of the AIDS epidemic.