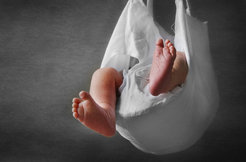 According to Myrskylä’s calculations, children born to mothers aged between 35 and 44 years are no less healthy later in life than those whose mothers delivered between ages 25 and 34. While it is still true that higher maternal age brings a greater risk of miscarriage and conditions like Trisomy 21, says demographer Myrskylä, “with respect to adult age early births appear to be more dangerous for children than late ones.” Children born to mothers aged 24 and younger have a higher number of diagnosed conditions, die earlier, remain smaller in size and are more likely to be obese as adults.

This is what Max Planck scientist Myrskylä discovered when he adjusted the US health data for the actual factors, the mother’s education and date of death, which only simulates a negative effect of maternal age. When not correcting for these elements, adult offspring were in fact ill more often if they were born to older mothers. The adult children of women delivering between ages 35 and 44 appeared to have about ten percent higher incidence of health conditions than those born to mothers aged 25 to 34.

However, in Myrskylä’s corrected analysis the health effect shrank to under five percent and therefore lost its statistical significance. In other words, the negative effect of advanced maternal age up to 45 years vanishes into thin air. “The data suggests that what at first looks seems like a negative advanced maternal age effect is an illusion driven by the mother’s education and the age at which the child loses the mother,” says Mikko Myrskylä. 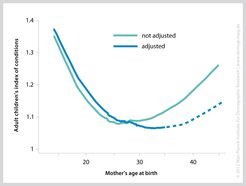 The two crucial most crucial factors for offspring adult health turned out to be the mother’s education and the number of years the mother and child were alive at the same time. The earlier a child lost her mother the worse her health was as an adult. This could be due to psychological effects accompanying the experience of losing a mother early, or because the time during which she could support her child economically and emotionally was shorter.

Most scientific studies analysing how the age of the mother at birth influences the child’s adult health (including Myrskylä’s) survey children born in the early 20th century or even earlier. Data for children born more recently would not be suitable since their adult and old-age health could not yet be fully evaluated. In these earlier times, humans died much earlier and the risk of becoming an orphan at a young age was significantly higher. With increasing life expectancy, however, this has changed as generations can expect to spend many decades together, in particular in developed countries. Therefore the risk of losing a mother at a young age most probably is no longer critical for children born today.

Still relevant today is the educational background of the mother. Many studies prove that mothers with lower education level have adult offspring who have worse health. Notably, in the early 20th century when today’s older people were born, parents with lower education continued to have children later in life, whereas better educated parents had less children at older ages. This led to the misinterpretation that high maternal age was harmful. In fact, it is the low parental education which is significant. This effect of advanced age no longer applies to children born today, as the relationship between maternal age and education is reversed. Today, the later in life a woman has a child the better their education.