Childhood trauma leaves mark on DNA of some victims

Abused children are at high risk of anxiety and mood disorders, as traumatic experience induces lasting changes to their gene regulation. Scientists from the Max Planck Institute of Psychiatry in Munich have now documented for the first time that genetic variants of the FKBP5 gene can influence epigenetic alterations in this gene induced by early trauma. In individuals with a genetic predisposition, trauma causes long-term changes in DNA methylation leading to a lasting dysregulation of the stress hormone system. As a result, those affected find themselves less able to cope with stressful situations throughout their lives, frequently leading to depression, post-traumatic stress disorder or anxiety disorders in adulthood. Doctors and scientists hope these discoveries will yield new treatment strategies tailored to individual patients, as well as increased public awareness of the importance of protecting children from trauma and its consequences. 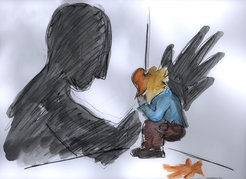 Zoom Image
Abused children often suffer from trauma throughout their adult lives. Patients that were exposed to trauma in early… [more]
© MPI of Psychiatry

Many human illnesses arise from the interaction of individual genes and environmental influences. Traumatic events, especially in childhood, constitute high risk factors for the emergence of psychiatric illnesses in later life. However, whether early stress actually leads to a psychiatric disorder depends largely on his or her genetic predisposition.

Research Group Leader Elisabeth Binder of the Max Planck Institute of Psychiatry examined the DNA of almost 2000 Afro-Americans who had been repeatedly and severely traumatised as adults or in childhood. One-third of trauma victims had become ill and was now suffering from post-traumatic stress disorder. The risk of developing post-traumatic stress disorder rose with increasing severity of abuse only in the carriers of a specific genetic variant in the FKBP5 gene. FKPB5 determines how effectively the organism can react to stress, and by this regulates the entire stress hormone system. The scientists hoped to cast light on the mechanisms of this gene-environment interaction by comparing modifications of the DNA sequence of victims who had not become ill with that of those who had.

The Munich-based Max Planck scientists were then able to demonstrate that the genetic FKBP5 variant does make a physiological difference to those affected, also in nerve cells. Extreme stress and the associated high concentrations of stress hormones bring about what is called an epigenetic change. A methyl group is broken off the DNA at this point, causing a marked increase in FKBP5 activity. This lasting epigenetic change is generated primarily through childhood traumatisation. Consequently, no disease-related demethylation of the FKBP5 gene was detected in participants who were traumatised in adulthood only.

Torsten Klengel, a scientist at the Max Planck Institute of Psychiatry, explains the findings of the study as follows: “Depending on genetic predisposition, childhood trauma can leave permanent epigenetic marks on the DNA, further de-repressing FKBP5 transcription. The consequence is a permanent dysregulation of the victim’s stress hormone system, which can ultimately lead to psychiatric illness. Decisive for victims of childhood abuse, however, is that the stress-induced epigenetic changes can only occur if their DNA has a specific sequence.”

This recent study improves our understanding of psychiatric illnesses which arise from the interaction of environmental and genetic factors. The results will help tailor treatment particularly for patients who were exposed to trauma in early childhood, thereby greatly increasing their risk of illness.