Will Your Child Be An Overweight Adult? 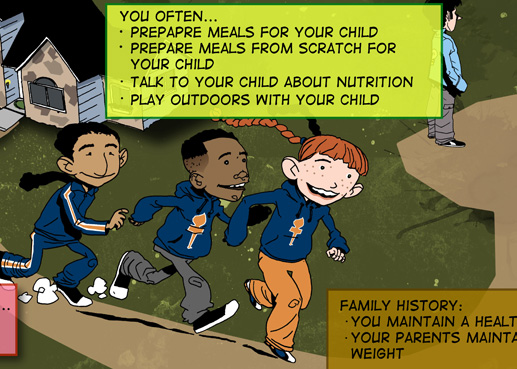 What behaviors from childhood correlate to healthy-weight adults? Researchers from UVM and Cornell have used the power of crowdsourcing to find out. (Image courtesy of the Cornell Food and Brand Lab)

Try this: ask five hundred people what they believe most contributed from their childhoods to how slim or overweight they are as adults. Could they — the crowd — discover insights into eating behaviors that experts may not have considered?

An international group of researchers, including the University of Vermont’s Complex System Center, and Cornell University’s Food and Brand Lab, set up an interactive website to gather information about childhood predictors of adult body mass index (BMI) from the general public.

The scientists discovered that “crowdsourcing” — everyday people asking and answering questions of each other — could zero-in on predictors of obesity. Some of these were already well documented by experts, like amounts of snacking and exercise, hours of sleep and television watching.

More interesting, the website visitors discovered some intriguing connections that experts hadn’t considered. For example, “parents packing their children’s lunch to school or talking to them about nutrition,” are correlated to a healthier adult weight, but “have not been the subject of extensive research,” the team of scientists write in the Feb. 5 issue of the journal PLOS ONE.

“Obesity is a very well-investigated subject and yet the public was able to find new angles,” says Josh Bongard, a UVM computer scientist and co-author on the new study. “The non-expert might trigger the expert to think along a different line that they haven’t tried before. We’re democratizing investigation here.”

Over a two-week period, 532 adults from various English-speaking countries visited the website and supplied their height and weight to determine their BMI. Then they had the chance to pose questions like, “When you were a child…how many times a week were you left alone for longer than an hour?” The volunteers also answered questions posed by other participants — and these answers were analyzed with computer algorithms, looking for a relationship between the factor being questioned and adult BMI.

“The most highly correlated question was: did your parents encourage you to clean your plate?” says Paul Hines, a co-author and professor in UVM’s College of Engineering and Mathematical Sciences. “If your parents had forced you to eat everything on your plate as a child, then you’re more likely to be overweight as an adult.”

In contrast, Bongard says, “if your parents packed a lunch for you when you were a child, you tend to be of a healthier weight as an adult.”

Bongard and Hines are quick to distinguish statistical correlations from the actual causes of obesity. “Correlation does not imply causation,” Bongard says, invoking a basic rule of science. “This is all correlation. But it makes you think about causation. And immediately ask why?”

The submitted questions ranged over the participants’ childhood experiences, including home environment, psychological well-being, lifestyle, the building they lived in and family history. Adult visitors to the website who had a healthy weight reported having the following childhood experiences in common: their families prepared meals using fresh ingredients; their parents talked with them about nutrition; they frequently engaged in outdoor physical activity with their families; they slept a healthy amount on weeknights; and they had many friends.

In contrast, visitors who were overweight reported having the following childhood experiences in common: food was used as a reward or punishment in their home; they had obese parents or grandparents; they drank juice and soda more than water; their parents restricted their food intake; and they were bullied by peers.

“Interestingly, two specific dimensions came up that might need more attention; that is, whether the family primarily prepared meals using fresh ingredients and whether children drank juice or soda instead of water,” the new study notes, “Although it has been shown that soda consumption is related to overweight, the specific way the question is asked by comparison to water drinking frequency might be more diagnostic.”

The new study flows from long-term obesity research by the Cornell Food and Brand Lab, led by co-author Brian Wansink. In 2012, he read a paper, “Crowdsourcing Predictors of Behavioral Outcomes,” written by UVM’s Josh Bongard and Paul Hines. There, the UVM scientists reported on how they had created a new crowdsourcing tool to test research questions that experts might not have thought of. One of their preliminary experiments — using a public website — was an exploration of body weight.

This unexpected result got the attention of Wansink and his team and soon they were collaborating with the UVM scientists on the new PLOS ONE study.

“Our main goal is to get beyond any one domain — BMI or energy use or smoking or financial health — to make this a general tool,” says UVM’s Bongard. “In the future, we want you to be able to download the tools to make a website like this — and configure it for the issue that you’re interested in. Ultimately, this is about trying to empower the individual to study whatever they are interested in.”

This is one of several crowdsourcing projects that Bongard, Hines, and their students have been working on, including two that are live now and seeking participants. Energy Minder is using the same method as the BMI study to better understand energy efficiency. Another, developed by undergrad Alex Berger ’14, is exploring predictors of personal wealth with the question: “How much money do you have in your bank account?”

“What we’d like to do is make the process of exploring a scientific question much easier,” says Paul Hines. “Instead of requiring a million dollar NIH grant, you could, with a few buttons, get going and start collecting data.”

As demonstration of this idea, the new PLOS study shows that crowdsourcing can find new predictors of obesity. “Parents should make note of these predictors,” a release from the Cornell lab states. Drawing on the new crowdsourced insights, the lab’s expert list of what parents should aim for now reads: “from-scratch-meals, healthy eating conversations, plenty of sleep, outdoor exercise, and healthy friendships with peers.”

The new paper was a collaboration by Kirsten Bevelander of the Department of Communication Science, University of Amsterdam, the Netherlands; Kirsikka Kaipainen of VTT Technical Research Centre of Finland; Robert Swain, Josh C. Bongard, and Paul Hines of College of Engineering and Mathematical Sciences, University of Vermont; Simone Dohle of the Institute for Environmental Decisions, Consumer Behavior, ETH Zurich; and Brian Wansink of Cornell University’s Food and Brand Lab.

Portions of this story were written and reported by Katherine Baildon.