Home » Cosmetic Surgery » When Africa smiles thanks to plastic surgery 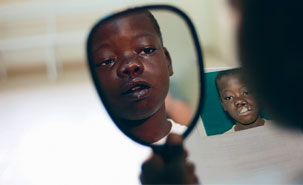 Five days after an operation performed by Canadian surgeons of Mission Sourire d’Afrique (Africa Smiles Mission), the scars have already begun to heal. A year later, a smiling and healthy child poses for the camera in her mother’s arms. The girl’s face is transformed.

Children like this are the reason that every year around twenty volunteers directed by Université de Montréal’s Dr Louise Caouette-Laberge travel to various African countries to perform free surgical operations, bringing smiles to these children’s faces. Professor Couette-Laberge in fact co-founded Mission Sourire d’Afrique with her husband, Jean-Martin Laberge. Over the past six years, more than 400 children like Kadiatou have received care from the mission.

“We don’t perform miracles; only operations on patients we can help,” says the plastic surgeon in her office at Sainte-Justine UHC, Université de Montréal’s affiliated children’s hospital, where she has headed the clinic and taught paediatric plastic surgery to future doctors for over 30 years.

Now, as Head of Humanitarian Development at Université de Montréal’s Department of Surgery, she spends four to six weeks a year on these trips that take her to the far reaches of the African brush and to many countries in Asia and South America.

It was during her first mission to China in 1999, under the auspices of the American organization Operation Smile, that Caouette-Laberge was initiated into humanitarian action… in makeshift operating rooms making-do with the means at hand. She returned delighted. “We were going through a dark period in Quebec because hospital staff had been pushed into retirement by the government. On my return from the mission, I saw things differently. Despite its limitations, our system seemed highly efficient to me. I’m not saying that everything is perfect, but we have the chance to practice our profession in excellent conditions.”

For example, in the West, children born with cleft lips are treated in the first three months of life to prevent the deformity from worsening as they grow. Consequently, the abnormality, which affects about one in a thousand children, is rare in the school population. It is different for children in developing countries who do not have access to surgeons. Another objective of the mission is to train professionals locally to continue the good work long after the volunteers have left.

Mission Sourires d’Afrique is made up of a team of passionate and dedicated volunteers from a variety of Montreal medical institutions (Ste-Justine UHC, Montreal Children’s Hospital, Maisonneuve-Rosemont Hospital). Additional team members include volunteers from the business community. Everyone contributes to the overall fundraising efforts in order to finance free surgical missions to French-speaking Africa. Collecting the $80,000 needed each year for missions would not be possible without the collaboration of the Saint-Justine Hospital Foundation, which has supported MSA since 2006, and the participation of SmileTrain, an international organization that also funds a portion of each mission. The mission cooperates with Francophone African countries and Haiti because French is the language spoken by the mission’s volunteers. This allows volunteers to communicate and share knowledge with local teams.

Caouette-Laberge became interested in plastic surgery when she understood its potential for improving health and quality of life. Being good with her hands and hungry for knowledge, she gravitated towards micro-surgery in the 1980s. One of her first operations as a surgeon caused a stir. She was able to reattach an eight-year-old child’s arm that had been torn off by a motor vehicle on her family’s farm. The happy story brought her media attention from coast to coast. “I was only practicing my profession the best I could,” she said.

Proclaimed “Personality of the Week” by La Presse in December 1986, she was named “Woman of the Year” at the Salon de la Femme the following May and received many other honours. In 1990, she notably received the Albert Royer Award, which recognizes the excellence of a professor in continuing medical education.

She talks about her speciality for the benefits it brings to children who come to Sainte-Justine Hospital. She appreciates the opportunity and knowledge it has given her to restore a paralyzed child’s smile by grafting leg muscle to the child’s face or using rib cartilage to shape a missing ear. You can read the satisfaction on her face when she declares, “Look at these smiles!” while showing pictures of children who have been operated on.

Remaining discreet, she prefers the calm serenity of the doctor’s office to the television studio. If she accepted to be interviewed by Université de Montréal’s communications team, it was mostly for her cause, which deserves to be known. Moreover, contributions to MSA can be made through their Web site. Their slogan is “Souriez don” or “Donate a smile.”

A mother of four, Dr Caouette-Laberge is today a grandmother of five. She is happily devoted to her grandchildren. “In the summer, I completely unwind,” she says. I garden, do sports, and build sand castles with my family, whom I adore. It’s important for me to take off once in a while. Even when the needs of surgery are enormous.”