Max Planck researchers have proven something scientifically for the first time that laypeople have always known: the mere sight of delicious food stimulates the appetite. A study on healthy young men has documented that the amount of the neurosecretory protein hormone ghrelin in the blood increases as a result of visual stimulation through images of food. As a main regulator, ghrelin controls both eating behaviour and the physical processes involved in food metabolism. These results show that, in addition to the physiological mechanisms for maintaining the body’s energy status, environmental factors also have a specific influence on food consumption. Thus, the pervasive presence of appetising food in the media could contribute to weight increase in Western populations. 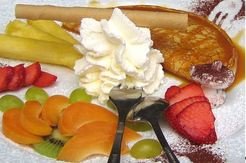 Zoom image
Just seeing it creates an appetite: Such images generate the feeling of hunger due to the hormone… [more]

Warning: “Avoid looking at pictures of appetising food as it will make you hungry!” Dieticians could be making recommendations along these lines in the future. It has long been known that, in addition to the physiological regulatory circuits for the maintenance of a sufficient energy status for the body, external stimuli like smell or the sight of food also influence our feelings of hunger and our resulting eating behaviour. The danger that the exposure to such images will result in the consumption of food that is not needed to maintain the body’s energy status is particularly high in our advertising-dominated society.

In a study involving healthy male subjects, Axel Steiger and his research group at the Max Planck Institute of Psychiatry investigated the molecular processes for the control of food consumption. They examined the specific physiological reaction of the test subjects to images showing either delicious food or non-edible objects. The concentrations of different hormones in the blood such as grehlin, leptin and insulin, which play a role in the regulation of food consumption, were measured. The researchers actually observed that the concentration of grehlin in the blood increases specifically in response to visual stimulation with food images.

“The findings of our study demonstrate, for the first time, that the release of ghrelin into the blood for the regulation of food consumption is also controlled by external factors. Our brain thereby processes these visual stimuli, and the physical processes that control our perception of appetite are triggered involuntarily. This mechanism could prompt us to eat a piece of cake just two hours after breakfast,” says Petra Schüssler, a scientist at the Max Planck Institute. She thus recommends that individuals with weight problems should preferably avoid looking at images of appetising food.