ANN ARBOR, Mich. — If you got hit with any of the ‘intestinal bugs’ that went around this winter, you’ve felt the effects of infectious microbes on your digestive system. 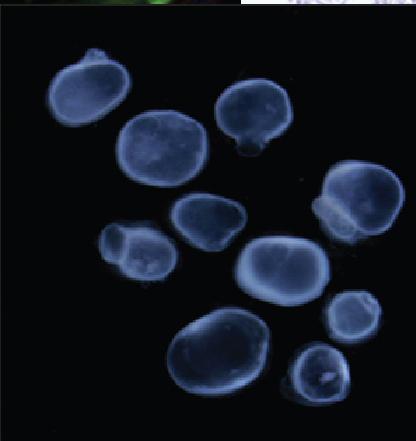 Each of the human intestinal organoids is about the size of a BB.

But scientists don’t fully understand what’s going on in gut infections like that – or in far more serious ones that can kill. Many mysteries remain in the complex interaction between our own cells, the helpful bacteria that live inside us, and tiny invaders.

Now, a team of University of Michigan scientists will tackle that issue in a new way. Using human stem cells and a new five-year, $6.4 million federal grant, they’ll grow tiny “guts in a dish” in the laboratory and study how disease-causing bacteria and viruses affect the microbial ecosystem in our guts. The approach could lead to new treatments, and aid research on a wide range of diseases.

This work was started as part of the U-M Medical School’s self-funded Host Microbiome Initiative and Center for Organogenesis, and the U-M Center for Gastrointestinal Research, funded by the National Institutes of Health. It also received funding from the U-M’s MCubed initiative for interdisciplinary work.

It will allow the U-M team to expand their effort to grow human intestinal organoids, or HIOs – tiny hollow spheres of cells into which they can inject a mix of bacteria. They’ll work with researchers at other institutions, as part of the Novel, Alternative Model Systems for Enteric Diseases, or NAMSED, initiative sponsored by the National Institutes of Health’s National Institute of Allergy and Infectious Diseases. 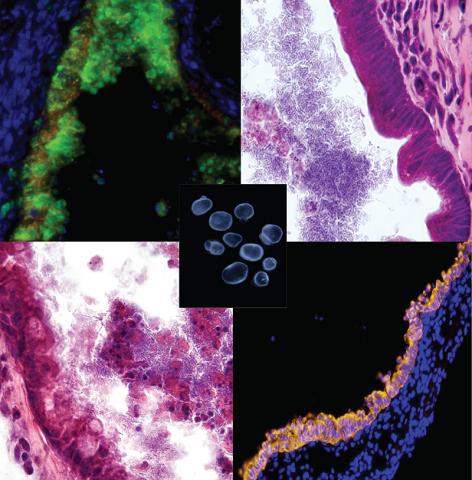 U-M researchers were the first to use HIOs to show the effects of infectious bacteria in the oxygen-free gut environment.

To grow HIOs, the team starts with human embryonic stem cells – cells that can become any cell type in the body – that they coax to become gut cells. Under the right conditions, the cells multiply and organize themselves in a way that mimics the layered structure of the lining of the small intestine. Each HIO is about size of a BB.

This gut lining, called the epithelium, is where the rubber meets the road in the interaction between microbes and our body.

Our normal microbes (also known as the microbiome) can help us, for example by aiding in digestion. But disruption of the microbiome through things like antibiotic treatment can allow invaders such as Clostridium difficile to attack the cells of the epithelium.

Vincent B. Young, M.D., Ph.D., who leads the research team and co-leads the Host Microbiome Initiative, envisions that U-M’s work on HIOs could help researchers worldwide.

“Eventually, we want this to be a model for anyone to use, one that can be scaled up to create large arrays of HIOs for high throughput uses such as drug screening,” he says. “This approach gives us a microscopic view of the human gut in a way that hasn’t been possible before, and will help us answer burning questions, including those surrounding emerging diseases.”

The HIO research team extends across several departments and schools on the U-M campus.

Young is joined by fellow Medical School faculty members Christiane Wobus, Ph.D., Jason Spence, Ph.D., Mary O’Riordan, Ph.D., and Eric Martens, Ph.D.. O’Riordan, Wobus and Martens are members of the Department of Microbiology and Immunology; Young and Spence are in the Department of Internal Medicine.

The team also includes U-M College of Engineering professor Shuichi Takayama, Ph.D. from the Department of Biomedical Engineering and the Macromolecular Science and Engineering Program. Takayama heads the Micro/Nano/Molecular Biotechnology Lab and has been involved in other “organ on a chip” development efforts.

Together, they’ll develop the HIO model further, to scale it up and optimize it using microfluidics, detection technologies and microinjection techniques.

The guts of the research

The team will study the interaction between HIOs and the normal gut microbiome, as well as disease-causing pathogens. They’ll also look at what happens when the cells of the immune system carry the genetic traits that people with Crohn’s disease carry – which alters the gut environment by promoting inflammation when no threat is present.

In another project, they’ll look at how the gut lining develops in a germ-free environment, as it does in a developing fetus. The HIOs will allow them to study how the expression of genes in the cells changes when microbes are added – giving them a chance to study conditions such as the necrotizing colitis which can ravage the guts of newborns.

Young notes that research in living animals is important to understand the gut microbiome as is work in humans with digestive disorders. But the cell-based HIO model offers the ability to do large-scale research in rapid order, in a way that complements these other approaches. U-M microbiome researchers including those taking part of the Host-Microbiome Initiative are using all types of platforms to study the complex microbial community within us.

He also notes that the stem cell-based HIO approach offers many advantages over other cell-based gut model approaches, which have used cancer cells or animal cells. HIOs develop several cell types, which together make up the gut lining. Each HIO can survive for months to over a year.

In addition to the research tools and labs made possible by the Medical School’s own funding of the Host Microbiome Initiative, the research will rely on other existing U-M tools developed by the Biointerfaces Institute and the Michigan Center for Integrative Research in Critical Care.  It will also lead to the training of additional graduate students and postdoctoral fellows.

The new grant was awarded by the National Institute of Allergy and Infectious Disease (AI116482).