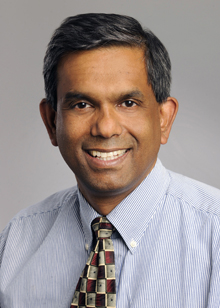 A research team led by Emory University, the Johns Hopkins University School of Medicine, and Cedars-Sinai have completed the first major, in-depth analysis of genetic risk factors of inflammatory bowel disease in African-Americans. The study is published online in the journal Gastroenterology.

Crohn’s disease and ulcerative colitis are chronic autoimmune diseases that affect as many as 1.6 million Americans. Patients with IBD have immune systems that attack their own intestines, resulting in inflammation. According to the Crohn’s and Colitis Foundation of America, recent years have seen a steady increase in reported cases of IBD in African-Americans.

“Clearly, there are differences with disease presentations with IBD in African-Americans,” says Subra Kugathasan, MD, professor of pediatrics at Emory University School of Medicine and a senior author of the study. “We hope to have genetic explanations for this by expanding studies in African-Americans.”

“This study is the culmination of over a decade of work,” says Steven Brant, MD, director of the Johns Hopkins Meyerhoff Inflammatory Bowel Disease Center and corresponding author of the study. “We hope it’s the first of many steps to better understand and treat these debilitating diseases.”

IBD genetics have been evaluated in more than 1,000 studies in white and Asian — primarily East Asian — populations. Although the risk is slightly lower than that of white Americans, African-Americans are at significant risk for IBD.

The study evaluated more than 1,500 African-American patients with IBD — including 1,088 with Crohn’s disease and 361 with ulcerative colitis — from 35 IBD centers across North America and used 1,797 African-Americans without IBD for comparison.

The primary goal of the study was to determine whether African-Americans share the same 163 separate genetic variations established in white Americans as IBD genetic risk factors. A secondary goal was to identify novel regions of the genome, known as loci, causing IBD risk in African-Americans.

The researchers also examined if, within the majority of these IBD genetic loci, there are genetic variations that are of particular risk for causing IBD in African-Americans that are distinct from those identified in whites.

“We also studied whether there are regions of the genome that cause or protect IBD risk in African-Americans that arise from either their West African or European genetic ancestries,” Brant says.

“The hope for genetic advances is that we will be able to develop new therapies and more personalized approaches to managing these chronic and potentially debilitating diseases,” says Dermot McGovern, MD, of Cedars-Sinai and co-senior author with Kugathasan and Brant. “These benefits should be available to all sections of society. This study is important, as it extends these possible advances to the African-American population, who may be at risk of more severe IBD.”

The study revealed that in African-Americans, as in whites and Asians, the dominant region for ulcerative colitis genetic risk is in the human leukocyte antigen (HLA) region, a region that is a major determinant of immune regulation and risks for other immune diseases, like celiac disease and type 1 diabetes. However, the specific variant associated with African-Americans in this region is the same as the variant most highly associated with Japanese and Korean ulcerative colitis, and to a lesser degree ulcerative colitis in Europeans. It also is the same major risk variant in HLA for lupus in African-Americans, whose lupus risk is four times greater than white Americans.

The study did not find evidence for the major risk variant for European ulcerative colitis as having a role in the African-American population. The authors found strong but not confirmatory evidence for novel variations in a major IBD gene, the interleukin (IL) 12 cytokine subunit, IL12B, and for new regions — not previously identified in other IBD studies — of chromosomes 2 and 3, for IBD and ulcerative colitis, respectively.

Identifying specific regions of the African-American genome that arise separately from the ancestral West African versus the ancestral European genome that are responsible for a portion of the genetic risk of IBD in the African-American population, the researchers found evidence for regions on four of the 22 autosomal (non-sex-linked) chromosomes — 10, 15, 16 and 17 — as causative for IBD. Each region contains tens of genes. For each of these regions, the IBD risk appears to come from the Caucasian ancestral genome that makes up 20 percent of the African-American genome overall or, conversely, from unique African protective variants as demonstrated in the chromosomal 17 region within immune regulatory genes STAT3 and STAT5.

The authors analyzed cellular pathways that result in IBD development. As in whites, the major pathways were those related to cytokines and chemokines — molecules that transmit inflammatory signals — and cell signaling, known as JAK-STAT. However, the top pathway for ulcerative colitis in African-Americans and fourth of importance to both Crohn’s disease and IBD overall was related to measles infection, a pathway not previously found important to IBD in whites.

In addition to Brant, Kugathasan and McGovern, the study was authored by 52 other physicians and researchers in the United States and Canada.