A collaboration between the Broad Institute, Harvard University and
researchers based in Africa studies the genome
of the malaria parasite. 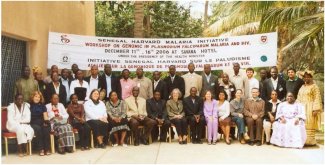 In a first of its kind study, researchers from the Broad Institute of MIT and Harvard and the Harvard University School of Public Health proved that a newly identified gene mutation in the parasite’s genome leads to drug resistance to many anti-malarial drugs.

In a paper published on April 21 in PLoS Genetics, the Broad/Harvard team reported on the identification of a new gene region in the P. falciparum parasite known as PF10-0355. Parasites with this mutation produce too many copies of the gene. The gene mutation causes increased resistance to malaria drugs such as halofantrine, mefloquine and lumefantrine. This research provides an explanation for how the genomics of the infecting P. falciparum parasite helps mediate drug resistance in people.

This work represents several years of collaborative research between the Broad Institute, Harvard School of Public Health, Harvard University, and investigators based in Senegal and Nigeria to find causes of drug resistance at the genetic level.

Drug resistance undermines the ability to combat malaria globally. This study is a proof-of-concept investigation to see if using a population genetics approach could help find regions in the P. falciparum genome, called genetic variants, associated with drug resistance. “We are asking what are the differences at the genome level between resistance and sensitive parasites,” explains co-author Dyann Wirth, Chair, Department of Immunology and Infectious Diseases, Harvard School of Public Health and Broad senior associate member.

To accomplish the task, researchers needed to develop the necessary DNA sequencing and analysis tools. Using infected blood samples collected previously for other purposes, so-called historical samples, the team isolated the P. falciparum parasite and sequenced its DNA. They next performed a genome-wide association study (GWAS), looking for unique genetic variations between the 57 parasite isolates from Africa, Asia, and South America, where malaria is commonly found.

Early on, the team identified a number of candidate gene regions, or loci. They then tested those gene regions for their drug responses to 13 antimalarial drugs. “This was the first of this kind of study that both identified and functionally tested a gene locus to demonstrate that in fact it confers a level of resistance,” explains co-author Pardis Sabeti, assistant professor, Harvard University, and Broad Institute senior associate member. Other researchers have begun to carry out GWAS in malaria but had not yet proved the associations with a functional test.

“This work is the first step in applying the approaches of the Human Genome Project to the malaria parasite using GWAS,” says Wirth, who spent a year-long sabbatical at the Broad Institute in 2005-2006. “Having this tool available means we may be able to identify more genes for drug resistance using this unbiased approach.”

The seeds of this collaborative project started about five years ago following discussions between Wirth, Sabeti, and Eric Lander, Broad’s director. Lander wanted to bring the power of the Broad’s genomics skills to advance the understanding of human infectious diseases. The team applied for a Burroughs Wellcome seed grant and a Gates Foundation grant to perform the genomics of malaria and to develop tools to study the genetic diversity of the parasites and its evolution using sequencing and GWAS studies similar to those now done routinely at the Broad.

The team hopes this work will have implications for finding emerging drug resistance trends before they become widespread. “Historically we know that as drug pressures are applied to treat malaria in people, resistance to drugs develops,” says co-author Sarah Volkman, senior research scientist at the Harvard School of Public Health and a Broad visiting scientist. Today, public health officials are concerned about emerging resistance to artemisin-based compounds, the current drug of choice for treating malaria. Already, some hints of artemisin resistance have surfaced in Southeast Asia.

“The immediate application is to develop surveillance tools to be able to tell when drug resistance is appearing in a population,” says Wirth. “Our goal is to actually anticipate the problem and then be able to deal with it.” Possible measures would include switching drug treatment, using intense parasite-control measures to eliminate all the drug-resistant parasites before they had a chance to spread, and to apply public health practices like insecticide-treated bed nets and sleeping hammocks.

“This is new territory,” Wirth adds. “In the past, resistance has been detected by patients failing treatment. By that time, usually the proportion of resistant parasites is usually very high which means you can only document it, not prevent full-blown resistance.”

The Broad/Harvard team will continue this to include studying to contemporary parasites, those that are causing illness in humans, to see if they can find new genetic markers and then test them to see how these mutations play a role in helping the P. falciparum parasite survive through drug pressure.