ANN ARBOR, Mich. — An antidepressant drug used since the 1960s may also hold promise for treating sickle cell disease, according to a surprising new finding made in mice and human red blood cells by a team from the University of Michigan Medical School. 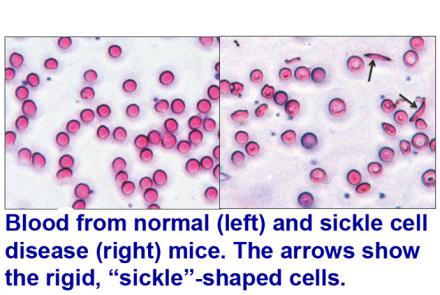 The discovery that tranylcypromine, or TCP, can essentially reverse the effects of sickle cell disease was made by U-M scientists who have spent more than three decades studying the basic biology of the condition, with funding from the National Institutes of Health.

Their findings, published in Nature Medicine, pave the way for a clinical trial now being planned for adult patients who have the life-threatening condition. The discovery may also lead to other treatments for the disease, which leads misshapen red blood cells to cause vascular damage and premature death.

But the researchers caution it is too soon for the drug to be used in routine treatment of sickle cell anemia, an inherited genetic disease that affects tens of thousands of Americans and millions of others worldwide.

The climax of a decade of discovery

In the new paper, the researchers describe a painstaking effort to test TCP’s effect on the body’s production of a particular form of hemoglobin – the key protein that allows red blood cells to carry oxygen.

The drug acts on a molecule inside red blood cells called LSD1, which is involved in blocking the production of the fetal form of hemoglobin. The U-M team zeroed in on the importance of LSD1 as a drug target after many years of research.

Then, they literally did a Google search to find drugs that act on LSD1. That’s how they found TCP, which since 1960 has been used to treat severe depression.

In the new paper, they describe how TCP blocked LSD1 and boosted the production of fetal hemoglobin — offsetting the devastating impact of the abnormal “adult” form of hemoglobin that sickle cell patients make.

“This is the first time that fetal hemoglobin synthesis was re-activated both in human blood cells and in mice to such a high level using a drug, and it demonstrates that once you understand the basic biological mechanism underlying a disease, you can develop drugs to treat it,” says Doug Engel, Ph.D., senior author of the study and chair of U-M’s Department of Cell & Developmental Biology. “This grew out of an effort to discover the details of how hemoglobin is made during development, not with an immediate focus on curing sickle cell anemia, but just toward understanding it.”

Together, they have identified LSD1’s crucial role, and its epigenetic interaction with two nuclear receptors in the nuclei of red blood cell precursors called TR2 and TR4.  Working in tandem, they repress the expression of the gene that makes fetal hemoglobin – an effect called gene silencing. So, interfering with this repression allows the fetal hemoglobin subunits to be made.

Treatment with TCP caused fetal hemoglobin to be produced at such high abundance that it made up 30 percent of all hemoglobin in cultured human blood cells – a finding Engel called “startling.” TCP is FDA-approved, though patients taking it need to follow strict dietary guidelines to avoid drug interactions with certain naturally occurring chemicals in some foods.

Sickle cell disease occurs when a person or animal inherits two defective copies of a gene that governs the production of the “adult” form of hemoglobin. James Neel, the first chair of the U-M Department of Human Genetics, co-discovered the genetic basis for the disease in the late 1940s.

In sickle cell disease, the body makes a form of adult hemoglobin that can aggregate to cause red blood cells to become C-shaped or “sickle” shaped, and stiff and sticky. Those cells clog small blood vessels in the limbs and internal organs, causing organ damage, pain, and raising the risk of infection. Life expectancy in these patients is greatly shortened.

In a very small number of sickle cell patients, the ‘fetal’ form of hemoglobin – which is usually only made in the womb and the first couple of months of life – keeps being produced throughout life. These patients have symptoms that are either far less severe or nonexistent.

Andrew Campbell, M.D., who directs the Pediatric Comprehensive Sickle Cell program at U-M’s C.S. Mott Children’s Hospital and has worked with Engel on previous research, finds the new findings are very exciting news for sickle cell patients, since there are not enough treatment options. But, he notes, more clinical research is needed to determine if the findings from mice and cultured human red cell precursors will translate to humans for TCP or even other drugs that inactivate LSD1.

The first such clinical trial is now being planned with the sickle cell team at Wayne State University in Detroit. Further information will be available later this year if it receives approval to go forward. At the same time, U-M is exploring other possible drug candidates targeting the same pathway.

Engel is working with U-M psychiatrist Juan Lopez, M.D., to study the effect of TCP — and other antidepressants in the class known as monoamine oxidase inhibitors — on hemoglobin production in adults. The study is still seeking volunteers who are already taking these drugs to treat major depression. To learn more about that study, email [email protected].

The study was funded by NIH grants DK086956 and HL24415 and an American Heart Association postdoctoral fellowship, as well as NCI and Medical School support to the Vector, Flow Cytometry, DNA sequencing and Microarray Cores. U-M has filed for a patent on the discovery.