The trial, Chou says, showed that the amplitude of movement due to the tremor decreased measurably, and that patients could move the spoon much more normally. Though the trial did not include patients with hand tremors caused by other movement disorders such as Parkinson’s disease, the device may be useful to such patients too, he notes.

Says Pathak, “A key aspect of Liftware is a design with empathy. We hear of people struggling every day, and decided to apply technology in a way to directly help. We hope the final product is something people can feel proud of using, and allow them to regain independence and dignity.”

How the study was done

The researchers tested the device’s impact both with the microelectronics turned on, and with them turned off so there was no correction for movement. Patients and Chou could not tell by feeling the device whether it was on or off.

All three measures – objective rating by Chou, subjective rating by patients, and digital data from the device’s connection to a computer – showed improvement for eating and transferring items when the device was turned on, compared to when it was off.

When the patients were asked to simply hold the spoon halfway between the table and their mouth, the two objective measures showed improvement when the device was on, though the patients didn’t report a significant difference themselves.

“Our data show this device has very good potential to assist those who have tremor and aren’t candidates for surgery,” he says. “Compared with other devices designed to limit tremor by weighting or constraining limbs, this approach allows movement and is easier to use.”

The study included 15 adults between the ages of 59 and 80 whose tremor caused them to spill food or drink. They had experienced tremor for anywhere from 5 years to 57 years. All of the patients stopped taking their medication temporarily before testing the Liftware device. Five of the patients had undergone deep brain stimulation, but turned off their tremor-controlling implant for the study. 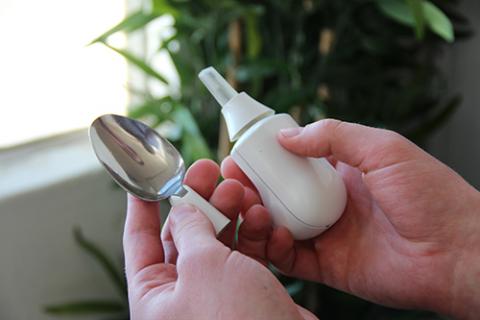 The spoon part of the device comes off for cleaning – and other attachments are being developed.

Lift Labs is now developing other attachments for the Liftware device, and working with the International Essential Tremor Foundation to raise money to give devices to people with essential tremor who cannot afford the $295 price of a base unit.

In addition to Chou, who does not have a business relationship with Lift Labs, and Pathak, who co-holds two U-M patents with others who developed the ACT approach, the research team included Lift Labs’ John A. Redmond, Ph.D., and Michael Allen. The research was funded by NIH SBIR grant 5R44NS070438. Chou is the Thomas H. and Susan C. Brown Early Career Professor of Neurology.

More information on the Liftware product is available at www.liftlabsdesign.com .