ANN ARBOR, Mich. – From the time he was a toddler until his assassination in November 1963, President John Fitzgerald Kennedy suffered from a series of medical issues, but no condition seemed to cause him more distress than his chronic low back pain. 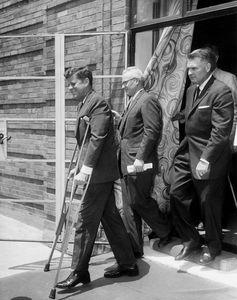 A Robert Wood Johnson Medical School rheumatologist and a clinical psychologist at the University of Michigan’s Chronic Pain and Fatigue Research Center reviewed the impact back pain had on the life and death of the 35th president.

Back pain may even have been a contributing factor in his assassination, authors write in the historical article published in Regional Anesthesia and Pain Medicine.

Chronic back pain co-existed for the President with diagnosed Addison’s Disease, “spastic colitis,” which is now called irritable bowel syndrome, allergies and other medical problems.

“Tan and fit, JFK exuded strength and vitality despite the fact that his general health was quite poor and his back and gastrointestinal pain were almost incapacitating,” says co-author Afton L. Hassett, Psy. D., a psychologist and associate research scientist in the Department of Anesthesiology at the University of Michigan Health System.

“Had JFK presented for treatment today, the contemporary understanding of the mechanisms underlying chronic pain would support a different treatment approach,” she says.

JFK had low back pain almost constantly, perhaps starting with a minor sports injury in 1940. However a specific cause was never identified and a surgical cure not achieved, even after lumbosacral and left sacroiliac fusion surgery.

Few were aware in 1954 of a post-operative coma and septicemia JFK suffered, during which he received last rites of the church. His fifth and final surgical procedure was in September 1957 and this left him disenchanted with finding a surgical solution for his back pain, according to the article.

Later a conservative program, including trigger point injections and exercises, provided modest relief.  He wore a back brace and took hot baths several times a day; often using crutches while walking except when he was in public view.

By many accounts the Kennedy White House was a hotbed of extramarital sexual activity, and former mistresses write that Kennedy’s back pain impacted the experience. Women noted that the President’s limited mobility apparently restricted positions to those in which a straight spine could be maintained and back motion minimized.

“At least half the days

he spent on this earth

were days of intense

“The mechanisms underlying JFK’s pain were likely complex involving a combination of peripheral factors such as narrowing of the L5-S1 disc space and dysfunction in central nervous system pain processing, or what we are coming to refer to as ‘centralized pain’,” Hassett says.

Rather than disc degeneration being the sole explanation for pain persistence, increased neural activity can manifest as pain hypersensitivity. The pain system changes and pain is perpetuated and amplified by dysfunction in central pain processing, Hassett explains.

His symptoms appeared to be exacerbated by stress — for example, noted symptomatic worsening during the Cuban Missile Crisis, and failed Bay of Pigs invasion — which is commonly observed in those with centralized pain.

Regardless of the advances in understanding CNS dysfunction, JFK today might still be subjected to surgery and/or large doses of opioid medications, although there is scant evidence that either would work, authors write.

The best evidence for the treatment of centralized pain conditions include centrally acting agents like dual uptake inhibitors, and anticonvulsants, as well as exercise and cognitive behavioral therapy, authors write.

“A multicomponent approach that combines medications and nonpharmacological therapies tailored for an individual’s particular needs is likely to yield the best results,” Hassett says.

President Kennedy will be remembered for his many accomplishments such as the successful outcome of the Cuban missile crisis, expanding the space program, founding the Peace Corps, addressing discrimination and poverty and establishing the nuclear test ban treaty.  Less apparent is the daily battle he waged with medical symptoms, authors write.

By 1962, JFK’s pain stabilized. He took every precaution to avoid trauma and was reluctant to discontinue use of his back brace and crutches when recommended by physicians.

“Several biographers have noted that his back pain consumed a great deal of his time and effort and may have been a contributing factor in his assassination in Dallas in 1963,” authors write. “When the first bullet struck him in the back of the neck, his back brace held him erect, allowing the next and fatal bullet to strike the back of his head. JFK’s aching back was with him until the bitter end.”