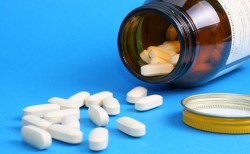 But a study by a team at Vanderbilt University Medical Center shows that pregnant women are commonly being prescribed opioids — narcotic pain relievers such as hydrocodone — which results in an increased likelihood of NAS. In addition, the study found that opioid type and duration of exposure combined with tobacco use or selective serotonin reuptake inhibitor use (for treating depression and anxiety) augmented risks for NAS.

The study, “Prescription Opioid Epidemic and Infant Outcomes,” looked at three years of data from TennCare, Tennessee’s Medicaid program, and assessed records for 112,029 pregnant mothers. An estimated 28 percent of the women, or 31,354, were prescribed and filled at least one opioid pain reliever. Of the babies with NAS, 65 percent had mothers that legally filled prescriptions for opioid pain relievers. Results were published today/April 13 in the journal Pediatrics.

“We found that babies exposed to opioids pain relievers were more likely to be born preterm, have complicated births, low birth weight and have complications such as meconium aspiration syndrome (a sign of infant distress at birth) and respiratory distress,” said lead author Stephen Patrick, M.D., MPH, assistant professor of Pediatrics and Health Policy in the Division of Neonatology with the Monroe Carell Jr. Children’s Hospital at Vanderbilt.

“Not all babies exposed to opioids have drug withdrawal after birth for reasons that aren’t entirely clear. Our study found that several things increased an infant’s risk, including the duration of opioid use, the type of prescription opioid, how many cigarettes a woman smoked and if they used a common antidepressant medicine called selective serotonin reuptake inhibitors.”

The study shows that compared to women with no opioid exposure, the pregnant women who took opioid pain relievers were more likely to be white, have anxiety or depression, suffer from headache or migraine and have musculoskeletal disease.  A majority of the women prescribed opioids, 96 percent, were prescribed short-acting medications, while 2 percent received maintenance doses and less than 1 percent received long-acting opioids.

“Historically, drug withdrawal for newborns has been described among illicit drug use such as heroin or women treated for previous opioid abuse, but this is really one of the first studies to look at legal prescriptions for pregnant women. And it draws attention to what is going on in our nation,” Patrick said.

Nationwide, the amount of prescriptions for opioid drug use has quadrupled. In 2012, an estimated 259 million prescriptions were written for opioid pain relievers in the United States. That’s enough for one prescription for every adult in the U.S., Patrick said.

The financial impact is substantial. As a population, every $1 spent on short-acting opioid pain relievers was associated with $50 spent caring for infants with drug withdrawal. National health care expenditures for treating babies with NAS are estimated to be about $720 million a year, according to previous work done by the same researchers.

Tennessee began taking action against overprescribing and doctor shopping for opioids in 2006 when it created a prescription monitoring database, though it was an optional resource for providers and pharmacists. The state strengthened laws in 2013, mandating that providers and pharmacists use the system. Currently 49 states have similar drug monitoring programs. Missouri is the only state without one.

“All in all we hope the study garners the attention of state and federal policy makers to highlight that the prescription opioid epidemic is having a tangible impact on both mothers and infants,” Patrick said.