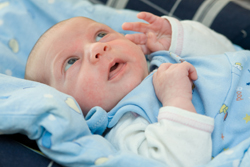 “Timely treatment is crucial,” says Kileny, who specializes in hearing problems in newborns and infants. “If treatment is delayed, children can start falling behind in critical milestones for speech and language development, and they may never catch up.”

Kileny is concerned that recent national media coverage of a condition known as “auditory neuropathy” might cause parents to delay treatment in the hopes that their child will recover naturally. One headline proclaimed, “Don’t let a doctor destroy your baby’s hearing” and the coverage prompted several calls to Kileny’s clinic from concerned parents.

Auditory neuropathy is a relatively rare condition thought to be caused by a malfunctioning auditory (hearing) nerve or by problems affecting the transmission of information between inner ear and the nerve.

A small number of children whose test results are consistent with auditory neuropathy do recover their hearing naturally, but most share health histories that include low birth weight, significant jaundice or certain respiratory problems, Kileny says. Many of them pass an initial hearing screening, but develop hearing loss during the first two weeks of life.

Despite some of the popular attention it has received, parents should remember that auditory neuropathy is responsible for only a relatively small fraction of hearing loss among infants — up to about one in ten congenitally hearing-impaired infants, Kileny notes.

Today, newborns are screened for hearing loss in the majority of hospitals and birthing centers. U-M has tested at-risk infants since 1985, and all infants since 2001.

If a problem is suspected, an audiologist or pediatric otolaryngologist can run a number of tests to determine the nature of the problem, including diagnosing auditory neuropathy. These include testing brain wave patterns in response to sound and electrical responses in various parts of the ear. Equally important, says Kileny, is behavioral hearing testing. Depending on the case, diagnostic imaging may also be necessary.

Treatment frequently begins with a closely observed trial period using hearing aids. If the child rejects the hearing aids or they seem to cause discomfort, parents should follow up with their doctor or audiologist.

If hearing aids are not effective, the child may be a candidate for a cochlear implant, a small, surgically implanted device that converts sound to electrical impulses that are transmitted to the auditory nerve.

Published data shows that the majority of infants and children with auditory neuropathy symptoms can benefit from hearing aids or cochlear implants.