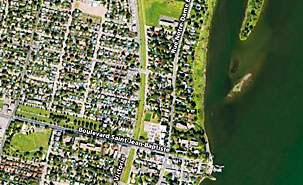 The findings, published as part of a master’s thesis, show that as the flow and water level of the St. Lawrence decrease, toxins locked in the riverbed may be released into the river. This may in turn, impact the health of humans and wildlife. “Heavy metals such as lead and mercury as well as PCBs and hydrocarbons are present in riverbed,” says Université de Montréal graduate student Priscilla Dugas, who conducted the environmental study with the Comité ZIP Jacques-Cartier. “Although these toxins are currently buried in the sediments at the river bottom, changes in the climate may soon expose them. We feel there should be further studies to determine the long-term consequences.”

Effects of climate change
Dugas compiled data taken recently by Environment Canada and other organizations. Her findings showed that the concentrations of these toxins, which are the result of industrial and agricultural activity, are above acceptable levels particularly in the Pointe-aux-Trembles area.

Simulation models indicate that the water level is decreasing and will continue to drop until 2050 due to the decrease in rainfall and the warmer temperatures, brought about by climate change. Contaminated parts of the riverbed will thus be exposed on the banks, where they will be accessible to animals and hikers.

“Stepping on newly exposed sections of the riverbed will release the toxins,” says Dugas. These contaminants may flow back into the water and become part of the food chain and eventually reach humans who consume fish from the area.

“Our findings are worrying,” says Dugas. “This is a security and health issue.”

From the 1920’s to the 1970’s, the lack of environmental regulations made it permissible for industries in the eastern part of the Montreal to dump waste directly in the river. Almost a century later, the city is still dealing with the consequences.