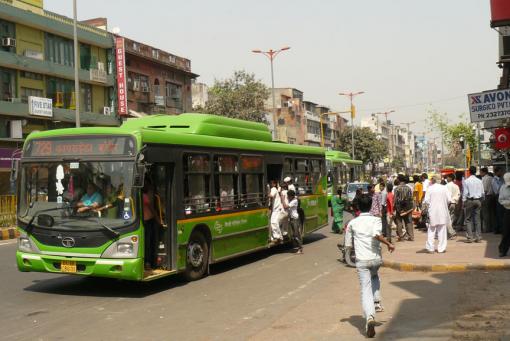 PROVIDENCE, R.I. [Brown University] — Recent radical changes in air quality regulations in Delhi, India, have had a substantial positive effect on the health of city residents, according to new research co-authored by Andrew Foster, professor of economics and community health and an associate at Brown’s Population Studies and Training Center. The findings from this first systematic study quantifying the heath effects of Delhi’s environmental interventions are published in the online issue of Atmospheric Environment. The research is among the first to use remote sensing imagery to look directly at the effects of air quality on health.

Ranking among the most polluted cities in the world, Delhi was at its peak of air pollution around the turn of the millennium, prompting the Indian Supreme Court to mandate a series of air quality regulations unprecedented in scope and implementation speed. Chief among the regulations was a mandate to convert all public vehicles — buses, taxis, and scooters — to compressed natural gas over a two-year period, substantially limit the flow of diesel trucks through Delhi during working hours, and close polluting industries in residential areas.

Three major findings emerged from the analysis. First, the interventions were associated with a significant improvement in respiratory health. Second, the effects of ambient air varied significantly by gender and income. For example, they found that the effects are significant and negative among the lower-income households. Third, the data suggested that the differences are strongly correlated with the amount of time one spends outside. The poorest men spend an average of seven hours outside per day, while men in the richest households spent almost no time outside at all. The findings suggest that poorer men exhibited a significant negative relationship between ambient air and respiratory health, and better-off men exhibited an insignificant relationship.

“The huge thing that jumped out is the difference between the relatively poor and the relatively well-off households in terms of the kinds of adverse health effects they experienced,” said Foster. “This really shows us something about the target population and the people who are being most affected by policy. It allows us to look at environmental justice on an individual level, rather than in regional groupings. … This research opened up a whole new agenda on how we should think about environmental regulation in low income countries.”

The paper is among the first to use MODIS remote sensing imagery to look directly at the effects of air quality on health, with the ground data used to help refine and test the validity of remotely sensed air quality estimates. These measures have since been used to look at the effects of voluntary environmental certification in Mexico in work published in the American Economic Review proceedings last year and by Kumar and a colleague at the National Bureau of Economic Research to examine the effects of restrictions on air quality that were imposed by the Chinese government during the Beijing Olympics.