Home » Eyes & Vision » The blind also have a Stripe of Gennari

The Stripe of Gennari develops even in those who are blind from birth and does not degenerate, despite a lack of visual input. This was discovered by Robert Trampel and colleagues from the Max Planck Institute for Human Cognitive and Brain Sciences using magnetic resonance imaging. This bundle of nerve fibers, which is approximately 0.3 mm thick, is not exclusively responsible for optic information. In the blind, it might play a greater role in processing tactile stimuli. This could contribute to an enhanced sense of touch and support fast reading of Braille. (Cerebral Cortex, Online 10. 02. 2011) 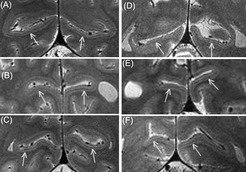 The Stripe of Gennari – also known as the ‘Stria of Gennari’ – transverses the gray matter of the primary visual cortex as a distinct white line. “Although the visual cortex is one of the best-studied parts of the brain, and the Stripe of Gennari is a rather obvious structure, why it develops and what its function is has not previously been studied in detail”, explains Robert Trampel from the Max Planck Institute for Human Cognitive and Brain Sciences. “An obvious connection with sight was assumed.”

However, as is now clear, this cannot be the only function of the stripe of Gennari: In a functional magnetic resonance imaging (fMRI) study, the researchers found the stripe of Gennari in the brains of congenitally blind subjects. “This brain structure therefore can’t exclusively be involved in vision and must be capable of carrying out other tasks”, says Trampel. In the blind, the Stripe of Gennari could play a role in supporting the sense of touch, the scientists speculate. “This faculty is essential in reading Braille and the region carrying the Gennari-Stripe is known to show an increased activity in the blind when performing this task.” All participants in the present study were highly proficient in reading Braille, having responded to an advertisement written in Braille in a newspaper for the visually impaired.

However, since the stripe of Gennari is already present in the first years of life and does not degenerate, it is likely to have an important role already in early infancy. In blind people, the brain uses tactile and acoustic stimuli to construct a rough spatial representation of the surroundings in the absence of visual information. The stripe of Gennari might play a role in this process and could later support highly demanding tactile tasks, like Braille-reading. In future studies with fMRI, the researchers aim to learn more about the work of this versatile nerve bundle in the human brain.