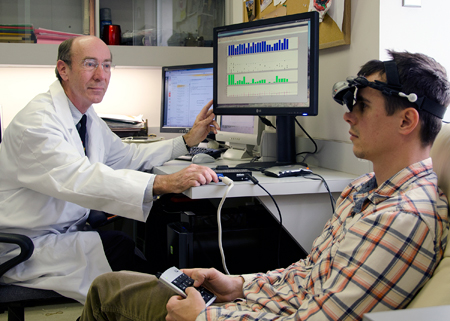 A research team led by Dr. Robert Hess from McGill University and the Research Institute of the McGill University Health Centre (RI-MUHC) has used the popular puzzle video game Tetris in an innovative approach to treat adult amblyopia, commonly known as “lazy eye”. By distributing information between the two eyes in a complementary fashion, the video game trains both eyes to work together, which is counter to previous treatments for the disorder (e.g. patching).

This medical breakthrough provides direct evidence that alleviating suppression of the weaker eye, by forcing both eyes to cooperate, increases the level of plasticity in the brain and allows the amblyopic brain to relearn. The research is published in the prestigious journal Current Biology.

Amblyopia is the most common cause of visual impairment in childhood, affecting up to 3 per cent of the population. It is caused by poor processing in the brain, which results in suppression of the weaker eye by the stronger eye. Previous treatments for the disorder, which have focused largely on covering the stronger eye in order to force the weaker eye to work, have proven only partially successful in children and have been ineffective in adults.

“The key to improving vision for adults, who currently have no other treatment options, was to set up conditions that would enable the two eyes to cooperate for the first time in a given task,” says Dr. Robert Hess, senior author of the paper and Director of Research Department of Ophthalmology at the RI-MUHC and at McGill University.

According to Dr. Hess and his colleagues, the adult human brain has a significant degree of plasticity and this provides the basis for treating a range of conditions where vision has been lost as a result of a disrupted period of early visual development in childhood.  The researchers examined the potential of treating amblyopic adults using the video game Tetris, which involves connecting different shaped blocks as they fall to the ground.

The researchers tested a sample of 18 adults with amblyopia. Nine participants played the game monocularly with the weaker eye, while the stronger eye was patched; the other nine played the same game dichoptically, where each eye was allowed to view a separate part of the game. After two weeks, the group playing the dichoptic game showed a dramatic improvement in the vision of the weaker eye as well as in 3-D depth perception.   When the monocular patching group, who had showed only a moderate improvement, was switched to the new dichoptic training, the vision of this group also improved dramatically.

The suitability of this treatment in children will be assessed later this year in a clinical trial across North America.

This work was supported by a grant from the Canadian Institutes of Health Research (CIHR).