No harm to mice testes from BPA in utero

Male mice whose mothers were exposed to either moderate or high levels of bisphenol A while pregnant did not grow up to show any adverse effects to their reproductive systems by several measures, according to a new study. Data on female mice is still forthcoming but less encouraging. 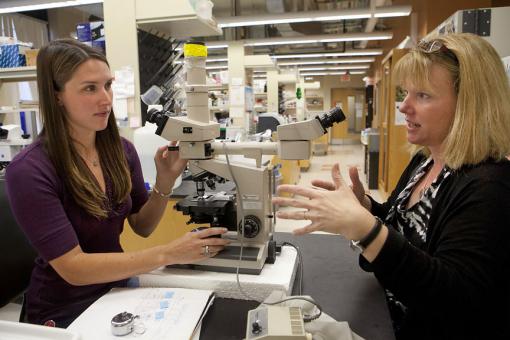 PROVIDENCE, R.I. [Brown University] — Bisphenol A (BPA), a common component of plastic used in many consumer products, has recently become infamous — and banned in some places — because it can mimic natural estrogen in the body. A new study by Brown University toxicologists, however, finds that male mice whose mothers were exposed even to high doses of BPA while pregnant developed no signs of harm to their testes as adults.

“This might alleviate some worries for the general public,” said Mary Hixon, assistant professor (research) of pathology and laboratory medicine in the Warren Alpert Medical School of Brown University and the paper’s senior author. “It comes down to the biology.”

The research, funded by a grant from the National Institutes of Health, appears in advance online in the journal Birth Defects Research (Part B).

In the study, a team led by Hixon and lead author Jessica LaRocca, a graduate student, exposed mice to BPA during days 10 through 16 of their pregnancy, the period of time when the sexual organs of their fetuses were developing.

The researchers then studied the litter size and viability of each mother’s pups and later studied several characteristics of the reproductive organs of their adult sons.

What they found is that by every measure at either dose level, the BPA did no apparent harm. The litter sizes of BPA-exposed mothers were not affected compared to the negative control, both at birth and at weaning. In the adult male mice, testis weight, body weight, and seminal vesicle weight were no different. The seminiferous tubules, sperm counts, and testosterone levels of BPA-exposed mice were also not significantly different. The mice exposed to the chemical also did not show any abnormal amount of cell death among cells that make sperm or in the levels of mRNA associated with testis maturation.

LaRocca and Hixon hypothesize that the mothers and their growing sons are able to detoxify much of the BPA via their metabolism, an important reason to test BPA exposure via the digestive system, the most common route of exposure to humans. BPA, which has been used in baby bottles and to line soda cans, leaches into the liquids people drink.

“So while the [mother] has the dose of 50 micrograms per kilogram, by the time it reaches the fetus that dose is much, much lower than if you were to inject the animal,” LaRocca said.

“Humans are not going to get the exposure the animals were exposed to,” Hixon added.

But by this ingestion method the researchers did find several negative effects of exposure to DES, a synthetic estrogen prescribed from the late 1930s to the early 1970s in hopes of preventing pregnancy complications. In the mice, DES significantly reduced litter size and steroidogenesis mRNA expression.

Hixon and LaRocca cautioned that while their study may offer some encouragement for male reproductive health to the extent it can be extrapolated from mice to men, it does not mean that BPA is harmless.

Hixon noted that the research team did not test whether the sperm of BPA-exposed mice were actually fertile.

More concerning is their data on the reproductive development of the female mouse pups born in the study. Although that analysis is more preliminary and still unpublished, it shows signs of lasting negative effects of BPA exposure in their mammary glands and ovaries.

In addition to Hixon and LaRocca, other authors on the paper include Alanna Boyajian, Caitlin Brown, and Stuart Duncan Smith.