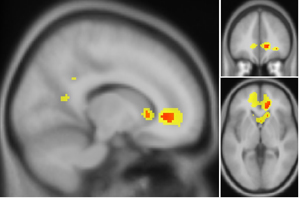 ANN ARBOR, Mich. — Numerous studies have shown that the brain molecule neuropeptide Y (NPY) helps to restore calm after stressful events. A team of University of Michigan-led researchers has now found that people whose genes predispose them to produce lower levels of NPY are more responsive to negative stimuli in key brain circuits related to emotion – and are therefore less resilient in the face of stress and may be at higher risk for developing a major depressive disorder.

The scientists hope the research will eventually help with early diagnosis and intervention for depression and other psychiatric illnesses, and in the development of therapies that can be tailored to individuals based on their genetic profiles. The findings were published Feb. 7 in the Archives of General Psychiatry.

“This is what we mean when we talk about ‘personalized medicine,’ ” says the study’s lead author, Brian Mickey, M.D., Ph.D., an assistant professor of psychiatry at the University of Michigan Medical School and researcher at the U-M Molecular and Behavioral Neurosciences Institute. “These are genetic features that can be measured in any person. We hope they can guide us toward assessing an individual’s risk for developing depression and anxiety.”

The findings also help fill in new areas on the genetic “map” of depression, says the study’s senior author Jon-Kar Zubieta, M.D., Ph.D., a professor of psychiatry and radiology and research professor at the Molecular and Behavioral Neurosciences Institute.

“We’ve identified a biomarker – in this case genetic variation – that is linked with increased risk of major depression,” Zubieta says. “This appears to be another mechanism, independent of previous targets in depression research, such as serotonin, dopamine and norepinephrine.”

Using three separate approaches, researchers found that individuals with the genotype that produces lower amounts of NPY had measurably stronger brain responses to negative stimuli and psychological responses to physical pain. They were also overrepresented in a population diagnosed with a major depressive disorder.

Using three separate approaches, each with a varying number of research subjects ranging from 58 to 152, U-M researchers and their partners studied the link between NPY gene expression and emotional processing.

U-M researchers recruited and characterized participants, performed neuroimaging, and conducted the pain challenge. Their partners at the Laboratory of Neurogenetics at the National Institute on Alcohol Abuse and Alcoholism in Bethesda, Md. performed the genotyping.

The research subjects were classified according to whether they had low, medium or high NPY gene expression.

Using functional magnetic resonance imaging (fMRI), the scientists observed the brain activity of each subject as he or she viewed neutral words (such as “material”) negatively charged words (like “murderer”), and positively charge words (like “hopeful”).

In response to negative words, subjects in the low NPY group showed strong activation in the prefrontal cortex, which is involved with processing emotion, while subjects with high NPY demonstrated a much smaller response.

“This tells us that individuals with the risk-associated NPY gene variant tend to activate this key brain region more than other people, even in the absence of stress and before psychiatric symptoms are present,” says Mickey.

In a second test, healthy subjects reported their emotional experiences during a stress challenge. Saline solution was injected into the jaw muscle, which produces moderate pain for 20 minutes, but no lasting harm. The level of pain was adjusted for each person to until it was, for them, a 4 on a scale of 1 to 10.

Lastly, scientists compared the NPY genotypes of subjects with major depressive disorder with control subjects to see if there was an association between the condition and low expression of NPY.

Subjects with low-expression NPY genotypes were overrepresented in the group with depression.

“We’re not just associating a particular gene with a particular illness,” Zubieta says. “We’re expanding the understanding of the physiology of depression.”

Disclosures: Zubieta has acted as consultant for Eli Lilly and Co, Merck and Johnson & Johnson over the last year.