When advice and experience do not agree At what point do people set aside advice and follow what they have learned from experience? Michael Frank, right, and Bradley Doll have found evidence of a genetic predisposition.
Credit: Mike Cohea/Brown University
A new study led by Brown University researchers finds a specific genetic association with adhering to advice that conflicts with experience. Variations in certain genes lead to a strong-willed prefrontal cortex that can bias the striatum, where experience is analyzed. 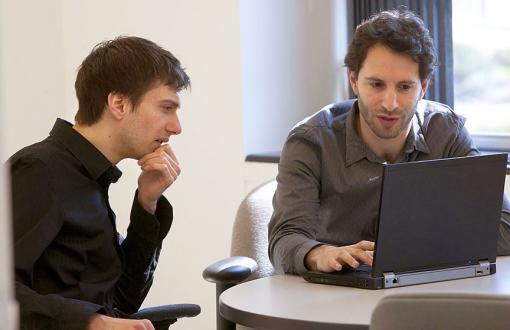 The story they tell in a paper in the April 20 issue of the Journal of Neuroscience is one of the byplay between two brain regions that have different takes on how incoming information should influence thinking. The prefrontal cortex (PFC), the executive area of the brain, considers and stores incoming instructions such as the advice of other people (e.g., “Don’t sell those stocks.”) The striatum, buried deeper in the brain, is where people process experience to learn what to do (e.g., “Those stocks often go up after I sell them.”)

Researchers including Michael Frank, assistant professor of cognitive, linguistic, and psychological sciences at Brown, have studied the striatum intensely, but have been curious about the effect that the advice-influenced PFC has on its function. It turns out that in a learning task, people are guided more by advice at the start. Their genes determine how long it takes before they let the lessons of experience prevail.

“We are studying how maintaining instructions in the prefrontal cortex changes the way that the striatum works,” said lead author Bradley Doll, a graduate student in Frank’s lab. “It biases what people learn about the contingencies they are actually experiencing.”

People with a variation on the gene DARPP-32 that affects the response to dopamine in the stratium allowed people to learn more quickly from experience when no advice was given, but also made them more readily impressionable to the bias of the PFC when instruction was given. Like a “yes man” who is flexible to a fault, the striatum would give more weight to experiences that reinforced the PFC’s belief, and less weight to experiences that contradicted it. Researchers call this confirmation bias, which is ubiquitous across many domains, such as astrology, politics, and even science.

“People will distort what they experience to be perceived as more consistent with what they thought already,” said Frank, who is also affiliated with the Brown Institute for Brain Science.

To conduct the experiment, the researchers recruited more than 70 people who gave saliva samples and then performed a computerized learning task. The subjects were shown symbols on a screen and asked to pick the “correct” one, which they had to learn via feedback. Because the feedback was probabilistic, it was impossible to choose the correct symbol on every trial, but subjects could learn over multiple trials which of the symbols were more likely to be correct.

For some symbols, subjects were given advice about which answer was more likely to be correct. Sometimes that advice was wrong. Ultimately the people with particular genetic variants were the ones who stuck with wrong advice the longest, and in a later test they were more likely to choose symbols that they were advised were correct over those that in reality had higher likelihood of being correct. Using a mathematical model, the researchers found that the extent of this confirmation bias on learning depended on their genes.

It may seem like having the genes for a strong-willed prefrontal cortex and an overly obsequious striatum could make people dangerously oblivious to reality, but Frank said there’s a good reason for brains to be hardwired to believe in advice: Advice is often right and convenient.

People inclined to follow instructions from others, albeit to varying degrees based on their genes, can make sensible decisions much more quickly than if they had to learn the right thing to do from experience. In some cases (e.g., “Danger: high voltage”) experience is a very dangerous way to learn. But in other cases (e.g. “The cable guy should be there at 1 p.m.” or “This slot machine pays off”), believing in advice for too long is just foolish.

“It’s funny because we are telling a story about how these genes lead to maladaptive performance, but that’s actually reflective of a system that evolved to be that way for an adaptive reason,” Frank said. “This phenomenon of confirmation bias might actually just be a byproduct of a system that tries to be more efficient with the learning process.”

In addition to Frank and Doll, Kent Hutchinson of the University of New Mexico is also an author on the paper. The National Institutes of Health funded the research.