The study, which will be published in the June 3, 2011 issue of Cell Stem Cell, but is currently available online, demonstrates that the gene-editing approach developed by Salk professor Juan Carlos Izpisúa Belmonte, Ph.D., and his team, provides an efficient and safe tool for cell engineering, and opens the way for gene editing-based stem cell therapies suitable for clinical applications.

“The ability to derive and grow human pluripotent stem cells in the laboratory has raised enormous expectations within the biomedical community due to their transplantational potential in clinical settings,” says Izpisúa Belmonte, a professor in the Gene Expression Laboratory and the study’s leader. “This, when combined with the development of efficient and safe gene editing technologies in human stem cells may greatly help the realization of these expectations.” 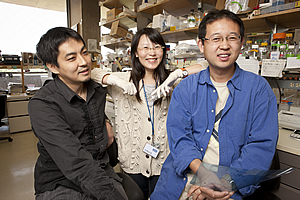 As envisioned by its earliest proponents, gene therapy introduces a healthy copy of a gene to compensate for a defective one in the patient, but that approach has a major drawback. “Many therapeutic genes are only expressed transiently before they get shut off by the host cell or they are not expressed as expected because they don’t occupy the same position in the genome as the natural genes,” explains postdoctoral researcher and co-first author Keiichiro Suzuki.

To overcome those limitation, over the last several years, scientists tried to develop methods that allow them to precisely excise the section of the genome that encompasses the mutated gene and replace it with a matching fragment but sans mutation. One such method relies on molecular “fingers” that grab onto DNA, make a cut and stitch in the new sequence.

“There are still some unresolved problems with the so-called zinc-finger method,” says postdoctoral researcher and co-first author Guang-Hui Liu. “The tricky part is to limit the zinc fingers to the sequence you are interested in to avoid introducing DNA breaks or new mutations elsewhere in the genome.”

The Salk researchers addressed the shortcomings of previously established methods by taking advantage of an iPS-based model of Hutchinson-Gilford progeria, which was recently established in the laboratory of Izpisúa Belmonte. A rare, premature aging disease, Hutchinson-Gilford progeria is caused by a single point mutation in the gene encoding lamin A, which forms a protein scaffold on the inner edge of the nucleus that helps maintain chromatin structure and organize nuclear processes such as RNA and DNA synthesis.

Importantly, more that 400 different mutations in the lamin A gene have been reported, which are associated with a wide range of human degenerative diseases including muscular dystrophy, lipodystrophies and neuropathies.

The gene-targeting approach developed by Suzuki and his colleagues relies on the use of so-called helper-dependent adenoviral vector to deliver large mutation-free DNA molecules into cells. Once there, these replacement pieces initiate a process known as homologous recombination, which works a bit like the “find-and-replace” command in a word processor. If a piece of DNA is long enough, it will find and line up with the same sequence in the genome and swap places.

“The process was remarkably efficient and we couldn’t detect any undesired off-target effects such genomic instability or epigenetic abnormalities,” says Liu. “What’s more, it allowed us to show that we can correct multiple mutations spanning large genomic regions.”

In addition to iPS cells derived from progeria-patients, the researchers successfully applied their method to adult mesenchymal stem cells, which can differentiate into a variety of cell types, including adipocytes, osteoblasts, chondrocytes, cardiomyocytes, and, as described lately, beta-pancreatic islets cells.

“As a proof of principle, we focused on mesenchymal stem cells because of their extensive use in regenerative medicine,” says Izpisúa Belmonte. “Lamin A mutations mainly effect mesoderm-derived tissues, thus gene-editing in these cells could be an attractive therapeutic option.”

The study was supported by the California Institute of Regenerative Medicine, the AFAR/Ellison Medical Foundation, the G. Harold and Leila Y. Mathers Charitable Foundation, the F.M. Kirby Foundation, sanofi-Aventis, MICINN, the Fundacion Cellex and grants from the National Institutes of Health.