Many more hereditary diseases than previously thought may be caused, at least in part, by errors in pre-mRNA splicing, according to a computer analysis by Brown University scientists. That could be good news because research suggests it may be possible to fix bad splicing. 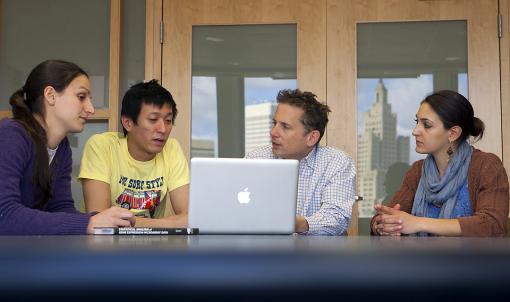 PROVIDENCE, R.I. [Brown University] — A new Brown University computer analysis that predicts the effect of genetic mutations on how the body splices mRNA indicates as many as a third of disease-related mutations may be linked to splicing problems — more than double the proportion previously thought.

“Something like 85 percent of the mutations in the Human Gene Mutation Database are presumed to affect how proteins are coded, but what this work shows is that 22 percent of those are affecting the splicing process,” said William Fairbrother, assistant professor of biology and senior author of a study appearing online this week in the Proceedings of the National Academy of Sciences.

Add that to the 15 percent already believed to affect splicing of mRNA, and nearly one in three mutations in the HGMD may owe at least part of their harmful results — hundreds of hereditary diseases — to the way in which they cause splicing errors.

“Splicing mutations are already known to be a large fraction, but we’re saying they are even more,” Fairbrother said.

Genes are sections of DNA sequence that provide the cell with the instructions, or code, for making the proteins that the body needs for all its functions. During this manufacturing process, useful protein coding sequences need to be cut out and reconnected — spliced — from longer sequences, much as usable movie scenes are cut from longer reels of film to make a movie.

The information necessary for the cell to join all the useful parts, or protein coding exons, together correctly is located within the sequence of that gene. Mutations that affect this splicing information are often very disruptive to gene function, causing entire exons (the scenes in a movie) to be lost from the final product. Despite this, a patient carrying a mutation that results in a faulty splicing, Fairbrother said, may eventually have a brighter outlook than a patient who has mutations in the exons themselves.

“A processing defect may be able to be detected and fixed much more easily and safely than a protein coding defect,” Fairbrother said.

Other researchers, for example, have already used engineered proteins called “antisense oligoes” to interfere with errant splicing operations, he said. An error in the genetic coding for a final product protein, however, can only be addressed through difficult and risky therapies that attempt to replace a whole gene.

“There’s perhaps a new type of therapy that could be directed at reducing the processing defects,” Fairbrother said.

The computer program that predicts splicing problems is a product of the multidisciplinary nature of Fairbrother’s lab team. The lab is based in Brown’s Department of Molecular Biology, Cell Biology, and Biochemistry, but lead author Kian Huat Lim is a computer scientist.

Lim, a graduate student, implemented a program to analyze the human genome and data on splicing operations. The idea was to look at short sequences that occur many times in the genome. The locations of these multiple occurrences told the scientists something about the function of the sequence. Sequences that help splicing often occur close to splice sites.

The program’s approach is loosely akin to the analysis of patterns and variations that a team of detectives might perform when trying to stop a crime wave (e.g., if surveillance videos record the same black van driving past banks at 11 a.m., noon, and 1 p.m. prior to robberies, police would want to find that van).

The team eventually started to notice that mutations that affected splicing created new sequence motifs that changed their distribution around splice sites in distinctive ways compared to mutations that did not affect splicing. They quantified and calculated this mathematical distance from the norm.

“The bigger the distance, the more likely that it affects splicing,” Lim said.

The program gave the team cues about which mutations from the HGMD to test in real lab experiments. In most cases, the computer program was correct about the effect the mutation would have on splicing. The team tested mutations associated with diseases including albinism and colorectal cancer and found that they do indeed cause splicing errors.

Lim said the program gives genetics researchers a way to triage the many mutations that pique their curiosity, to see which ones are most likely to have a clinical effect.

“Many times it is just too costly and too expensive to go into the lab and test every sequence you have,” Lim said. “It is much more helpful to have a computational tool that can filter out most of your sequences to leave you with some that the tool predicts will be the interesting ones.”

The team is considering making the program available via the Web later this year.

In addition to Fairbrother, Lim, and Ferraris, the paper’s other authors are undergraduate Madeleine Filloux and Benjamin Raphael, assistant professor of computer science.