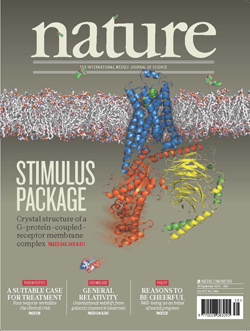 ANN ARBOR, Mich. – Three international teams of scientists, led by researchers at the University of Michigan, University of California San Diego, and Stanford University, have published a trio of papers describing in unprecedented detail the structure and workings of G protein-coupled receptors (GPCRs), a large family of human proteins that are the target of one-third to one-half of modern drugs.

Two of the papers are published as cover-story articles in the September 29 print issue of the journal Nature. The third paper was published in the September 12 early online edition of the Proceedings of the National Academy of Sciences (PNAS).

GPCRs are essential to human life, involved in almost every physiological function. Located within the membranes of cells, these receptors detect arriving hormones, chemical neurotransmitters, odors and other signaling molecules, then activate internal G proteins, which, behaving like molecular switches, initiate other events that affect everything from the senses and behavior to fundamental functions like heart rate and blood pressure. Malfunctions in these signaling pathways have been linked to dozens of diseases, including diabetes, blindness, asthma, depression and some forms of cancer.

“The 800 or so known GPCRs do an incredible variety of things, which is why they’re broadly considered the most important target for new drugs,” said Virgil Woods Jr., MD, a professor of medicine at UCSD School of Medicine and a co-author on two of the papers. “But historically they’ve been very difficult to work with. We haven’t had a good grasp of their precise structure and functioning. A lot of drugs are based on targeting GPCRs, but they’re hit or miss. Until recently, we have known little about how GPCRs actually work at the sub-molecular level.”

The three highly complementary papers go a long way toward addressing that shortfall.

“This is quite a big advance,” said Roger K. Sunahara, PhD, an associate professor of pharmacology in the University of Michigan Medical School and a co-author on all three papers. “We’ve known for awhile about some components of the GPCR signaling pathway, what they look like, but we haven’t known how the receptor actually turns G proteins on. These papers describe that process. They also provide a model for other receptor-G protein complexes, providing scientists with new templates to design new and more effective drugs.”

The first Nature paper, co-authored by Sunahara and Brian K. Kobilka, professor and chair of the Department of Molecular and Cellular Physiology at Stanford University and colleagues in Wisconsin, Michigan, California, Denmark, Belgium and Ireland, reveals the crystalline structure of the Beta-2 adrenergic receptor-G’s protein complex.

The crystallographic analysis, achieved by beaming X-rays at a target of millions of tightly packed, identical protein copies, is a major technological feat. “It reveals novel conformational structures, how the proteins change shape, when they are activated,” said Sunahara. “We saw novel states that we hadn’t anticipated. We had models, but most of them turned out to be under-estimations and perhaps a little simplistic. These new findings have made us rethink how other proteins might work with similar exposure to signaling. It’s set the stage for a lot of interesting research to come.”

But crystallography has its limits. While it produced an incredibly high-resolution portrait of a G protein and GPCR in the act of signaling, it lacks some important information about protein movement. “You have to be careful,” said Sunahara, because the crystallized product “is only a single picture of the dynamic interactions between receptor and G protein.” The second Nature paper addressed this limitation by employing hydrogen-deuterium exchange mass spectrometry (DXMS), an innovative protein analysis technology developed at UC San Diego that allows investigators to in effect visualize proteins in their natural water environment as they change shape during activation.

“Basically, you force the receptor and G protein through their cycle by adding activating drugs, and use DXMS to produce a picture of how the proteins change their conformations over time,” said Woods. “With DXMS, you can tell how the protein is moving at any time. It reveals its dynamic state and behavior.”

Sunahara agreed: “It highlights regions that we could see in the crystallized structure, but couldn’t determine their importance. This allowed us to assess how the complex formed, which is important to understanding how receptors turn on G proteins.”

The third paper, published in PNAS and co-authored with Georgios Skiniotis at the University of Michigan Medical School, describes the direct visualization and 3D reconstruction of the actual Beta-2 adrenergic receptor-G complex by single particle electron microscopy (EM).

“This was the first time this approach has been used to obtain the architecture of such a small membrane protein complex,” said Kobilka at Stanford University. “This EM structure was actually the first picture of this complex we had. While lower resolution than the crystal structure, it provides important information about the dynamic and flexible character of the G protein. We used this information to guide our approach to obtain crystals of the complex.”

The scientists say the improved understanding of how GPCRs interact with G proteins will likely reveal new insights that can improve how related drugs function and also present new and previously unknown therapeutical targets. But Woods said developments could extend much further: “This is a prototype complex. There are hundreds of related protein complexes involved in a wide variety of disease processes. We are now implementing the next-generation of DXMS analysis at UCSD, and look forward to making this remarkable technology readily accessible to investigators studying them.”

Skiniotis, research assistant professor at U-M’s Life Sciences Institute, adds, “The integration of orthogonal approaches, such as crystallography, electron microscopy, DXMS and biochemistry was crucial for revealing the inner workings of this signaling protein complex. It is this hybridization of methodologies through tight team work that will be needed to take us to the next level of mechanistic understanding for macromolecular ensembles.”