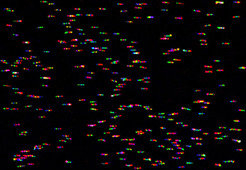 Zoom image
Each barcode consists of six spots made out of four colors (green, blue, red, yellow), and is bound… [more]

Odorant receptor genes form the largest gene familiy in the genome of many animals: for example, the mouse genome contains approximately 1200 of these genes. These genes are distributed across 40 gene clusters in the mouse genome, and clusters contain varying numbers of receptor genes. Nearby regulatory elements regulate the choice of individual genes within a cluster. Thus far, two such regulatory elements are known: the H element on chromosome 14 and the P element on chromosome 7.

Using RNA analysis, the Max Planck researchers discovered that the P element regulates the choice of individual genes from a cluster of 24 odorant receptor genes: in genetically modified mice that lack the P element, the probability that an olfactory sensory neuron chooses one of the genes is affected. “The P element can only turn a gene on, and so determine whether or not a cell chooses a receptor gene for expression. However, it has no influence on the number of receptor molecules produced by an individual cell. It works, therefore, like an on-off switch,” says Peter Mombaerts from the Max Planck Institute of Biophysics. The P element does not influence genes from other clusters on the same or on other chromosomes.

The engineered loss of the P element has different effects on the choice of odorant receptor genes: some genes are no longer chosen, others are chosen by fewer olfactory sensory neurons, and some genes remain completely unaffected by the absence of the P element. Thus the P element is not the only DNA sequence that regulates gene choice within this cluster of 24 genes. This is also indicated by the limited “reach” of the regulatory elements: the effect of the H and P elements is restricted to 200,000 base pairs. “We can estimate from the number of odorant receptor genes and the average distance between these genes the potential number of regulatory elements. Each cluster is controlled by several elements. We speculate that there may be as many as 150 such regulatory elements for odorant receptor gene choice in the mouse genome,” explains Mombaerts.

The scientists do not yet know how these elements regulate the choice of an odorant receptor gene within a cluster. It is possible that regulatory proteins dock to special binding sites on the DNA.

This discovery was made possible by the new method “NanoString” for measuring RNA levels in tissues. The Max Planck researchers were able to measure the levels of messenger RNA for half of all the odorant receptor genes in one go. With traditional methods, the RNA level could be analysed for only one odorant receptor gene at a time.

These findings have taken the scientists one step closer to figuring out how an olfactory sensory neuron selects one of 1200 genes for expression. “We still have a long way to go in solving this fascinating mystery. The arrangement in clusters may play a role. It is clear that this process does not just involve a single mechanism; odorant receptor gene choice is probably regulated at several levels” speculates Mombaerts.