Ribosomes, which make proteins, are startlingly variable in their composition and associations. This variability confers on them the ability to regulate genes, confounding previous ideas, Stanford researchers say.

Researchers at the Stanford University School of Medicine have discovered an unexpected layer of the regulation of gene expression. The finding will likely disrupt scientists’ understanding of how cells regulate their genes to develop, communicate and carry out specific tasks throughout the body.

The researchers found that cellular workhorses called ribosomes, which are responsible for transforming genes encoded in RNA into proteins, display a never-before-imagined variety in their composition that significantly affects their function. In particular, the protein components of a ribosome serve to tune the tiny machine so that it specializes in the translation of genes in related cellular pathways. One type of ribosome, for example, prefers to translate genes involved in cellular differentiation, while another specializes in genes that carry out essential metabolic duties.

The discovery is shocking because researchers have believed for decades that ribosomes functioned like tiny automatons, showing no preference as they translated any and all nearby RNA molecules into proteins. Now it appears that broad variation in protein production could be sparked not by changes in the expression levels of thousands of individual genes, but instead by small tweaks to ribosomal proteins.

“This discovery was completely unexpected,” said Maria Barna, PhD, assistant professor of developmental biology and of genetics. “These findings will likely change the dogma for how the genetic code is translated. Until now, each of the 1 to10 million ribosomes within a cell has been thought to be identical and interchangeable. Now we’re uncovering a new layer of control to gene expression that will have broad implications for basic science and human disease.”

Barna is the senior author of the study, which was published online June 15 in Molecular Cell.Postdoctoral scholars Zhen Shi, PhD, and Kotaro Fujii, PhD, share lead authorship. Barna is a New York Stem Cell Foundation Robertson Investigator and is also a member of Stanford’s Bio-X and Child Health Research Institute. 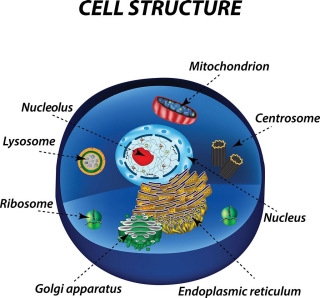 The ribosomes in each cell transform genes encoded in RNA into proteins. Timonina/Shutterstock

The work builds upon a previous study from Barna’s laboratory that was published June 1 in Cell. The lead author of that study was postdoctoral scholar Deniz Simsek, PhD. It showed that ribosomes also differ in the types of proteins they accumulate on their outer shells. It also identified more than 400 ribosome-associated proteins, called RAPs, and showed that they can affect ribosomal function.

Every biology student learns the basics of how the genetic code is used to govern cellular life. In broad strokes, the DNA in the nucleus carries the building instructions for about 20,000 genes. Genes are chosen for expression by proteins that land on the DNA and “transcribe” the DNA sequence into short pieces of mobile, or messenger, RNA that can leave the nucleus. Once in the cell’s cytoplasm, the RNA binds to ribosomes to be translated into strings of amino acids known as proteins.

Every living cell has up to 10 million ribosomes floating in its cellular soup. These tiny engines are themselves complex structures that contain up to 80 individual core proteins and four RNA molecules. Each ribosome has two main subunits: one that binds to and “reads” the RNA molecule to be translated, and another that assembles the protein based on the RNA blueprint. As shown for the first time in the Cellstudy, ribosomes also collect associated proteins called RAPs that decorate their outer shell like Christmas tree ornaments.

‘Hints of a more complex scenario’

“Until recently, ribosomes have been thought to take an important but backstage role in the cell, just taking in and blindly translating the genetic code,” said Barna. “But in the past couple of years there have been some intriguing hints of a more complex scenario. Some human genetic diseases caused by mutations in ribosomal proteins affect only specific organs or tissues, for example. This has been very perplexing. We wanted to revisit the textbook notion that all ribosomes are the same.”

In 2011, members of Barna’s lab showed that one core ribosomal protein called RPL38/eL38 is necessary for the appropriate patterning of the mammalian body plan during development; mice with a mutation in this protein developed skeletal defects such as extra ribs, facial clefts and abnormally short, malformed tails.

About 60 percent of a cell’s energy is spent making and maintaining ribosomes. The idea that they play no role in the regulation of genetic expression is, in retrospect, a bit silly.

Shi and Fujii used a quantitative proteomics technology called selected reaction monitoring to precisely calculate the quantities, or stoichiometry, of each of several ribosomal proteins isolated from ribosomes within mouse embryonic stem cells. Their calculations showed that not all the ribosomal proteins were always present in the same amount. In other words, the ribosomes differed from one another in their compositions.

“We realized for the first time that, in terms of the exact stoichiometry of these proteins, there are significant differences among individual ribosomes,” said Barna. “But what does this mean when it comes to thinking about fundamental aspects of a cell, how it functions?”

To find out, the researchers tagged the different ribosomal proteins and used them to isolate RNA molecules in the act of being translated by the ribosome. The results were unlike what they could have ever imagined.

“We found that, if you compare two populations of ribosomes, they exhibit a preference for translating certain types of genes,” said Shi. “One prefers to translate genes associated with cell metabolism; another is more likely to be translating genes that make proteins necessary for embryonic development. We found entire biological pathways represented by the translational preferences of specific ribosomes. It’s like the ribosomes have some kind of ingrained knowledge as to what genes they prefer to translate into proteins.”

The findings dovetail with those of the Cell paper. That paper “showed that there is more to ribosomes than the 80 core proteins,” said Simsek. “We identified hundreds of RAPs as components of the cell cycle, energy metabolism, and cell signaling. We believe these RAPs may allow the ribosomes to participate more dynamically in these intricate cellular functions.”

“Barna and her team have taken a big step toward understanding how ribosomes control protein synthesis by looking at unperturbed stem cells form mammals,” said Jamie Cate, PhD, professor of molecular and cell biology and of chemistry at the University of California-Berkeley. “They found ‘built-in’ regulators of translation for a subset of important mRNAs and are sure to find more in other cells.” Cate was not involved in the research.

The fact that ribosomes can differ among their core protein components as well as among their associated proteins, the RAPs, and that these differences can significantly affect ribosomal function, highlights a way that a cell could transform its protein landscape by simply modifying ribosomes so that they prefer to translate one type of gene — say, those involved in metabolism — over others. This possibility would free the cell from having to micromanage the expression levels of hundreds or thousands of genes involved in individual pathways. In this scenario, many more messenger RNAs could be available than get translated into proteins, simply based on what the majority of ribosomes prefer, and this preference could be tuned by a change in expression of just a few ribosomal proteins.

Barna and her colleagues are now planning to test whether the prevalence of certain types of ribosomes shift during major cellular changes, such as when a cell enters the cell cycle after resting, or when a stem cell begins to differentiate into a more specialized type of cell. They’d also like to learn more about how the ribosomes are able to discriminate between classes of genes.

Although the findings of the two papers introduce a new concept of genetic regulation within the cell, they make a kind of sense, the researchers said.

“About 60 percent of a cell’s energy is spent making and maintaining ribosomes,” said Barna. “The idea that they play no role in the regulation of genetic expression is, in retrospect, a bit silly.”

The research was supported by the New York Stem Cell Foundation, the Alfred P. Sloan Foundation, the Mallinckrodt Foundation, a Pew Scholars Award and the National Institutes of Health (a Director’s New Innovator Award and grants R21HD086730, R01DK101743, R01DK106241 and P50GM107615).

Stanford’s departments of Developmental Biology and of Genetics also supported the work.

Krista Conger is a science writer for the medical school’s Office of Communication & Public Affairs. Email her at kristac@stanford.edu.