Gene expression study made easy: Just sequence all of it 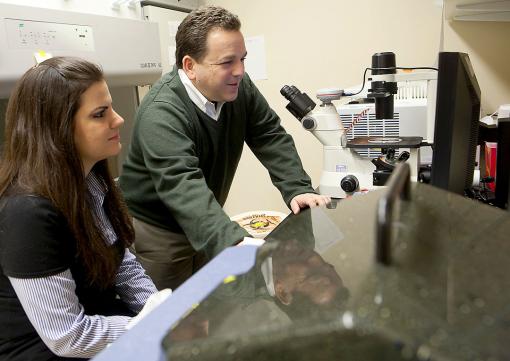 PROVIDENCE, R.I. [Brown University] — The population of Eric Morrow’s seminar “Neurogenetics and Disease” comprises mainly undergraduates who were skipping down the halls of their elementary schools when the first drafts of human genome sequences were published. When Morrow, assistant professor of biology, recently asked the class how to find the mutation behind a disease, a hand shot up in the back of the class to signal the answer: “Sequence the patient’s genome.”

Next-generation sequencers Eric Morrow, postdoctoral scholar Ece Gamsiz, and colleagues have sequenced the entire “transcriptome” of the mouse neural retina. They used “game-changing” technology that would have been prohibitively expensive even five years ago. Credit: Mike Cohea/Brown University

Ah, to be 19 and take gene sequencing for granted. Fifteen years ago the student’s answer would have been unthinkable. Five years ago, it would have been possible, but prohibitively expensive and cumbersome.

Now, armed with so-called “next-generation sequencing” technology, which brings the costs down to thousands rather than hundreds of millions of dollars, Morrow and other properly equipped researchers are obtaining detailed and comprehensive genetic sequences of cells from tissues of interest with relative ease.

In a new study, published in the journal Genomics, Morrow led a research group that has for the first time sequenced the entire “transcriptome” — all the messenger RNA transcribed from the DNA that codes proteins — of the mouse neural retina. Morrow’s overall goal is to investigate the genetic nature of disease in neural tissue and sure enough, the research has yielded some intriguing clues, Morrow said. He added that he will publicly share the entire dataset.

“The reason we studied the neural retina is that we wanted to ask: Is there anything different about those genes that cause disease in the nervous system and all of the other genes in the genome,” Morrow said. “There were some fairly prominent differences.”

Insights in the mouse retina

To Morrow, whose studies include the genetics of autism, the next steps have involved sequencing the transcriptomes of other neural tissues to see whether his observations from the retina are more generally true. For example, are disease-related genes unusually highly expressed elsewhere, too? And do specific neural tissues use a “synaptic vesicle” code, like the retina appears to have, or is this more specific just to retina as well?

Morrow said he’s been sharing his raw transciptome data publicly so that other scientists can ask their own questions.

Morrow has all but switched methods of genetic analysis. Before sequencing, scientists would use microarrays, which can be stocked with complementary strands of DNA or RNA to detect thousands of genes if they are present in a sample. But for a cost that’s tens of thousands of dollars and dropping, Morrow said, sequencing allows him to see everything in the cell and learn about the entire picture, whether genes were well-known enough to be on a gene chip or not.

“You don’t need to be sitting on a genome center to do this type of work anymore,” Morrow said.

In a similar vein in October, colleagues at Brown and Women & Infants Hospital reported sequencing the transcriptome of human egg cells and, in another first, their sidecar-like “polar bodies.” Their key insight: Expendable polar bodies reflect the gene expression of the precious eggs, making them potentially good, nondestructive indicators of which egg to choose for in vitro fertilization.

Only by seeing all the transcripts of all the genes in the mouse retina, and their full sequences, for example, could Morrow and Gamsiz have learned that disease genes are significantly longer, more likely to be transcribed in different ways, and expressed more abundantly.

“I think expression microarrays are becoming a little outdated,” Morrow said. “Not that we didn’t do well with them. But with them you are missing what you are not looking for because you don’t know what’s out there.”

What makes next-generation sequencing, in this case on an Illumina Genome Analyzer IIx, work better than the slow, labor-intensive and expensive technology used for sequencing just 10 years ago is partly that it sequences a large number of DNA or RNA fragments in parallel, vastly increasing the sequencing system’s throughput.

“The technology is amazing, it’s a game changer,” Morrow said. “In terms of molecular approaches to gene expression, genetics, and genomics it’s like a new day. The data are truly beautiful.”

As that metaphorical first light shines on the mouse retina transcriptome, an improved understanding of the genetics of neural disease may dawn with it.

In addition to Morrow and Gamsiz, other authors on the paper are Qing Ouyang, Michael Schmidt, and Shailender Nagpal.

Support for the research came from the Burroughs Wellcome Fund and Brown University’s Center for Vision Research.