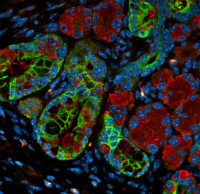 ANN ARBOR, Mich. — A mutant protein found in nearly all pancreatic cancers plays a role not only in the cancer’s development but in its continued growth, according to a new study from University of Michigan Comprehensive Cancer Center researchers. The finding suggests a possible target for developing new ways to treat this deadly disease.

The new study, published in the February Journal of Clinical Investigation, finds that in mice, mutant Kras also keeps the tumor growing and helps precancerous tumors grow into invasive cancer. When the researchers turned off Kras, the tumors disappeared and showed no signs of recurring.

The researchers were able to manipulate Kras in a mouse model that they designed to look at Kras at various points in pancreatic cancer development. In the precancerous lesions, turning off Kras eliminated the tumors in mice and the pancreas tissue returned to normal, with no signs of the cancer returning. With invasive cancer, inactivating Kras killed off the cancer but left the pancreas with fibrous areas similar to scar tissue. Tumors did not recur.

“Right now no drugs specifically target Kras, but there are drugs that target the cellular processes downstream of Kras. We next need to figure out which of these downstream effectors of Kras are important in pancreatic cancer,” says study author Marina Pasca di Magliano, Ph.D., assistant professor of surgery and of cell and developmental biology at the U-M Medical School.

Kras is also known to play a role in lung and colon cancer. But it is likely the biggest player in pancreatic cancer, where more than 90 percent of all tumors have mutated Kras. Pancreatic cancer is one of the most deadly types of cancer: about 4 percent of patients are alive five years after their diagnosis. The disease is often diagnosed when surgery is not an option and it tends to be resistant to available chemotherapies.

“There is a dire need for new therapies for pancreas cancer based on a better understanding of the biology of this disease. My lab is now looking at the downstream inhibitors of Kras to try to find the best target,” Pasca di Magliano says.

Note to patients: This research was based in mice and needs further testing before any possible treatments are available for clinical trials. For information about current pancreatic cancer treatments, call the U-M Cancer AnswerLine at 800-865-1125.

Pancreatic cancer statistics: 43,140 Americans will be diagnosed with pancreatic cancer this year and 36,800 will die from the disease, according to the American Cancer Society