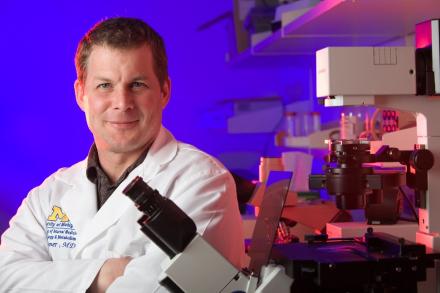 ANN ARBOR, Mich. — Two different genetic mutations cooperate to induce adrenal cancer, according to a new study from researchers at the University of Michigan Comprehensive Cancer Center and University of Sao Paulo in Brazil.

The finding provides new clues to this rare and deadly cancer type, and researchers hope it will lead to better treatments by targeting both mutations.

About 600 Americans are diagnosed with adrenal cancer per year. It is typically diagnosed in late stages when there is nearly no chance of survival beyond five years.

“Because adrenal cancer is so rare, it has been challenging to find enough patients who can provide tissue samples for research. Only through collaboration can we do this,” says senior study author Gary Hammer, M.D., Ph.D., the Millie Schembechler Professor of Adrenal Cancer at the University of Michigan Comprehensive Cancer Center.

The partnership between U-M and Sao Paulo has allowed researchers to collect tissue samples from 118 people with benign or cancerous adrenal tumors.

“Our goal is to understand these tumors and the genes that are critical lynchpins so that we can develop treatments that extend patients’ lives,” Hammer says.

By studying both benign and cancerous adrenal tissue samples, the researchers found aberrations in two genetic pathways: beta-catenin and insulin-like growth factor 2, or IGF-2. The benign tumors had a high percentage of mutations in beta-catenin, but IGF2 up-regulation was rare. On the other hand, most of the adrenal cancers exhibited IGF-2 up-regulation. Cancers that also had beta-catenin mutation were associated with high-grade disease and worse survival, compared to tumors with only IGF-2 up-regulation.

The researchers additionally tested this finding experimentally by inducing individual or combined mutations in beta-catenin and IGF-2 in the mouse adrenal. The mice developed cancer only when both mutations were present.

Results of the study appear in the September issue of the American Journal of Pathology.

The next step is to develop treatments that block both beta-catenin and IGF2.

“It’s more complex than just finding genes that cause cancer. Early results targeting IGF2 alone, while promising, don’t look as robust as we had initially hoped. That could be because we need to attack both IGF2 and beta-catenin. As cancer treatments move more toward targeted genetic approaches, it’s likely that these therapies will need to be used in combination,” Hammer says.