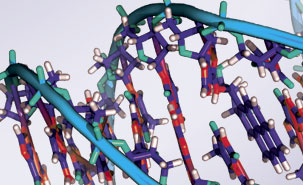 Crohn’s disease and ulcerative colitis, the two most common forms of IBD, are chronic inflammatory digestive disorders affecting 230,000 Canadians. Dr. John Rioux, researcher at the Montreal Heart Institute and Associate Professor of Medicine at the Université de Montréal, is one of the researchers who have identified 71 genetic regions newly associated with inflammatory bowel disease (IBD), increasing the total number discovered to date to 163, in one of the largest studies of its kind.

Also, the study points out that these regions showed a striking overlap with those implicated in autoimmune diseases and in immune deficiencies.  Even more surprising was the observation of a significant overlap with genetic regions controlling our response to microbial infections such as in the case of tuberculosis. These highlights were published in the prestigious scientific journal Nature today.

Common research
Up until this point, researchers have been studying Crohn’s disease and ulcerative colitis separately. This study was based on the fact that there seems to be a vast amount of genetic overlap between the two disorders.

In the first step of the study, the researchers conducted a “meta-analysis” of 15 previous genomic studies of either Crohn’s disease (CD) or ulcerative colitis (UC), the two most common forms of IBD, creating a large dataset that combined genetic information from some 34,000 individuals who took part in those studies. The results then formed part of a second meta-analysis that included data from new genome-wide scans of more than 41,000 DNA samples from CD/UC patients and healthy comparison subjects collected at 11 centers around the world by the International IBD Genetics Consortium.

“We have greatly expanded the map of genetic regions that are associated with IBD”, agreed Dr. John Rioux, co-lead author of this study and chair of the Consortium, with Jeffrey Barrett of the Wellcome Trust Sanger Institute in Cambridge, England, lead author of the study. “Each of these regions only increases a person’s chance of developing IBD by a fraction of a per cent and even taken together they cannot tell us who will or will not develop the disease. But they each tell a small story about the biology of this disorder, and by combining them we find biological pathways that, if disrupted, can lead to IBD.”

Immune system: a major factor
Dr. Rioux and the international team of researchers also studied the activity of genes in their IBD regions in hundreds of different types of cells involved in the immune system. They found that certain cells tended to produce more of these IBD genes, including many that are involved in the body’s first line defence against invasion. This illustrates that an immune response seems to be a major factor in IBD: when a bacterium is detected, these cells are not just activated, but become overactive.

“We see a genetic balancing act between defending against bacterial infection and attacking the body’s own cells,” said Dr. Barrett. “Many of the regions we found are involved in sending out signals and responses to defend against bad bacteria. If these responses are over-activated, we found it can contribute to the inflammation that leads to IBD.”

Nearly 100 scientists in 15 countries contributed to the new work, which “highlights the incredible power that working together in a large team can have,” said Barrett. “This would not have been possible without the thousands of DNA samples from patients with these conditions assembled by the International IBD Genetics Consortium. Collectively, our findings have begun to uncover the biological mechanisms behind this disease.”

About inflammatory bowel diseases
IBD results from inflammation in the digestive system and affects 2.5 million people worldwide. With over 230,000 cases, Canada has among the highest frequency of people with IBD in the world. Although it can affect any age group IBD is more likely to develop in teens and adults between 15 and 30 years of age. IBD is a lifelong debilitating condition. It can have a devastating impact on the physical and social lives of those affected.