A subcellular life and death struggle Healthy spermatids (maturing sperm) of a fly, left, are decimated in a setting dominated by a “segregation distorter,” right. A runaway snippet of code that rapidly copies itself helps target spermatids for fatal attacks. Credit: Reenan lab/Brown University
Biologists have been observing the “selfish” genetic entity segregation distorter (SD) in fruit flies for decades. Its story is a thriller among molecules, in which the SD gene destroys maturing sperm that have a rival chromosome. A new study reveals a tactic that gives SD’s villainy an extra edge.

A new study, a highlight in the March issue of the journal Genetics, provides the latest plot twist.

In TV listings the series would be described this way: “A gene exploits a rival gene’s excesses, sabotaging any sperm that bear a rival’s chromosome.” The listing is not an exaggeration except for ascribing malicious intent to strings of biochemicals. When male flies make their sperm, the SD gene (call it “A”) manages to rig meiosis — the specialized cell division that makes sex cells — so that maturing sperm that bear chromosomes with the susceptible allele (call that one “a”) end up defective and discarded. They never even leave the testes.

It is murder of a sort. Similar selfish systems occur in mammals, including humans. 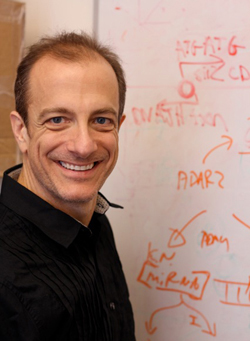 Robert Reenan
“Most genes, like most people, are good upstanding citizens, but some genes want to hog all the resources.”In the Genetics study conducted at Brown University, scientists uncover new clues about how the SD gene might be gaming the system against “a.” It’s a plot so fiendish, only an aggregation of genetic bases could evolve it. It also deepens biologists’ understanding of an instance in which life violates a fundamental balance predicted by the father of genetics, Gregor Mendel.

“Mendel’s first law is that different alleles of a gene will segregate,” said Robert Reeenan, professor of biology and the study’s senior author. “If we have two alleles — big A and little a — then Mendel says 50 percent of the sperm at random will get the big A and 50 percent of the sperm will get the little a. But some SD (A) alleles are so strong they pretty much kill off all the non-SD (a) chromosomes.

“This is a real cheater, a real stinker,” Reenan said. “Most genes, like most people, are good upstanding citizens, but some genes want to hog all the resources, hog all the benefit.”

What makes the “a” allele susceptible to SD’s subterfuge is the number of copies it harbors of a runaway snippet of genetic code called Responder. A few copies of Responder are no problem, but hundreds of copies make “a” susceptible. Some alleles have thousands of copies and only one in a thousand survives.

Genomes try to root out parasites like Responder by creating and dispatching proteins into the nucleus and the cytoplasm. These police proteins are armed with “police sketches” of the parasites in the form of small RNA transcripts.

It struck Reenan and lead author Selena Gell that this policing system — because it targets self-copiers like Responder — might somehow have a role in the SD saga. They decided to find out by purposely perturbing the system.

In the experiments described in Genetics, Reenan and Gell show that engineered mutations in the police gene named Aubergine (others on the force in the experiments are called Piwi, Squash, and Zucchini) amplify SD chromosomes’ success in eliminating Responder-laden sperm, compared to that of SD chromosomes without Aubergine’s help. The results show that this police system suppresses Responder, and therefore SD. It also means that if SD somehow can upset the policing system, it can have a field day.

“We’re the first to have experimentally shown that mutations in the system can modify the degree of distortion,” Reenan said. “We used homologous recombination to knock in a mutation specifically on the SD chromosome to compromise Aubergine, and that’s exactly what we saw: the chromosome became more selfish.”

Reenan and Gell did not go so far as to determine whether known SD-promoting genes called Enhancer of SD, Stabilizer of SD, and Modifier of SD act by interfering with Aubergine or its buddies on the force, but Reenan said that is among the next things his group will look into.

In the meantime, he reflects, it may not be entirely fair for biologists to label SD as “selfish” and not Responder as well. As an out-of-control self-repeater in the genome, Responder is surely no prize, and SD performs something of a service by taking it out when it can.

The whole story is really a clash of the selfish. “Humans, flies, all of us have been attacked for millennia by selfish genetic elements that want to make as many copies as possible,” Reenan said.

Sometimes, as in SD flies, there are no apparent ill effects, but when the selfish genes come in the form of viruses or other kinds of transposons, there can be trouble. So investigating the tactics of selfish genes is not merely the stuff of biological soap operas.

Gell, who was supported by a National Science Foundation Predoctoral Fellowship during the research, is now a postdoctoral scholar at Harvard University.