The when and where of the Y: Research on Y chromosomes uncovers new clues about human ancestry

ANN ARBOR, Mich. — More than 7 billion people live on this planet – members of a  single species that originated in one place and migrated all over the Earth over tens of thousands of years. 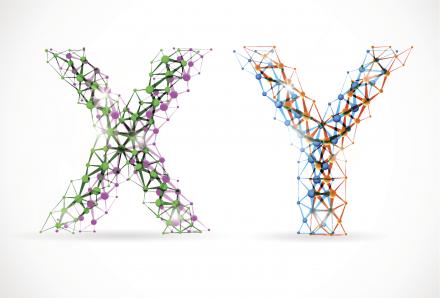 But even though we all trace our family lineage to a few common ancestors, scientists still don’t know exactly when and how those few ancestors started to give rise to the incredible diversity of today’s population.

A brand-new finding, made using advanced analysis of DNA from all over the world, sheds new light on this mystery. By studying the DNA sequence of Y chromosomes of men from many different populations, scientists have determined that their male most recent common ancestor (MRCA) lived sometime between 120,000 and 156,000 years ago.

It’s the first time the human ancestry has been traced back through the male line by sequencing the DNA of many entire Y chromosomes.

And, it agrees reasonably well with previous findings about our female most recent common ancestor, made by studying DNA carried down through the human race’s female line. Such studies used DNA from mitochrondria — structures inside cells – and placed that time of the most recent common ancestor between 99,000 and 148,000 years ago. That agreement makes the new finding especially significant:

The research was done by a team of scientists from Stanford University, the University of Michigan Medical School, Stony Brook University, and their colleagues, and is published in the journal Science.

The team hopes their work will lead to further research on Y chromosomes as vehicles for studying human history – and tracing male lineages back to the common “Adam” ancestors.

Jeffrey Kidd, Ph.D., an assistant professor in U-M’s departments of Human Genetics and Computational Medicine & Bioinformatics who worked on the new study, notes that only recently has it become possible to sequence Y chromosomes, because of technical limitations of previous approaches.

The new paper details how the team was able to make reliable measurements of the sequence variation along the Y chromosome – which is handed down only from father to son without exchanging, or recombining, genetic material with other chromosomes.

“We’re interested in understanding the historical relationships between many different human populations, and the migration patterns that have led to the peopling of the world,” he says. “We hope that others will make use of this approach and sequence additional chromosomes of interest that are related to the peopling of specific places.”

The study involved Y chromosomes obtained through the Human Genome Diversity Project, and from other sources. It included chromosomes from 69 men in several populations in sub-Saharan Africa, and from Siberia, Cambodia, Pakistan, Algeria and Mexico.

The great migrations of our ancestors out of Africa, across Asia and Europe and into the Americas all helped shape today’s populations – as did more recent forces related to colonialism and ever-growing global mobility.

Genetic studies such as this one may help anthropologists understand those migrations – and their timing – even better by giving them a genetic “clock” to use when studying today’s humans, or potentially DNA extracted from ancient bones. It may also help scientists understand the great genetic diversity seen across Africa, and the evolution process that led to modern humans.

The reconciliation of the timing of ancestors some might call “Adam” and “Eve”, however, may be this study’s most important immediate implication.

“This has been a conundrum in human genetics for a long time,” said Carlos D. Bustamante, Ph.D., a professor of genetics at Stanford and senior author of the study. “Previous research has indicated that the male MRCA lived much more recently than the female MRCA. But now our research shows that there’s no discrepancy. In fact, if anything, the Y chromosome may be a bit older.”

Several of the authors at Stanford report disclosures relevant to the paper. Jeffrey Kidd has no relevant disclosures.