An international research team, including scientists from the Research Institute of the McGill University Health Centre (RI MUHC), has identified a new disease related to an inability to process vitamin B12. The discovery is important because it could help doctors diagnose the disease and, eventually, could lead to prevention or treatment. The discovery, published today in The American Journal of Human Genetics, illustrates the complex and relatively new realm of medical discovery where researchers peer into the genetic make-up of patients to discern what went wrong to cause a disease. 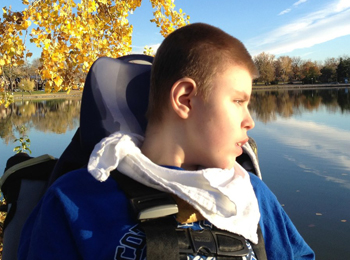 “Our colleagues at the University of Colorado, who led this study, informed us of a 9-year-old called Max, who was a patient at their Anschutz Medical Campus in Aurora in the US,” says Dr. David Rosenblatt, one of the study’s co-authors and a m

edical genetics and genomics scientist at the RI MUHC. Max was born with symptoms that resembled a rare genetic vitamin B12 problem called cobalamin C deficiency, or cblC for short, which can cause serious health problems such as developmental delay, epilepsy, anemia, stroke, psychosis and dementia. Max’s story can be read here: www.maxwatson.org, and on Facebook: www.facebook.com/maxwatsontrust.

But Max’s symptoms seemed too severe even for cblC, and the doctors’ suspicions were confirmed when genetic testing revealed that Max did not have the mutation for that disease. “Once all our data was pooled, we were aware of 16 other individuals around the world that matched Max’s profile,” says Dr. Rosenblatt, who is also holder of the Dodd Q. Chu and Family Chair in Medical Genetics in the Department of Human Genetics at McGill University.

With the consent of Max’s parents, who cooperated with the study knowing that the results likely would not help their son but might help future patients, a research team led by University of Colorado geneticist Tamim Shaikh, PhD, used next generation genetic sequencing to delve into Max’s DNA. His genes were compared to those of other patients who did not fit the cobalamin C model. All of the patients carried mutations that hadn’t been identified before. The problem was due to flaws in a gene designed to control the workings of an enzyme that, in turn, helps the body metabolize B12.

The researchers were finally able to give a name to Max’s disease – cobalamin X, or cblX – so named because it only occurs on the X chromosome and therefore only affects males. “This study highlights the growing importance of advances in genomic technology that allows the sequencing of even fragments of the human genome to detect the underlying genetic causes of disease,” said Shaikh, who is the senior author of the study and an Associate Professor in the Department of Pediatrics at the University of Colorado.

“This discovery will lead to the correct diagnosis of this serious genetic disorder and will change the way that genetic counseling is given in these families because we now know it is x-linked,” says Dr. Rosenblatt. “It also helps explain how vitamin B 12 functions in the body, even for those without the disorder.” The next step is to determine how mutations in the gene lead to the symptoms seen in patients with cblX in hopes of better understanding the disease and – some day – being able to head it off or treat it.

Vitamin B12, also known as cobalamin, is essential for human health because it helps the body convert food into fuel. It is also vital to the healthy functioning of the human nervous system and red blood cell synthesis. Unable to produce the vitamin itself, the human body has to obtain it from animal-based foods such as milk products, eggs, red meat, chicken, fish, and shellfish – or vitamin supplements. Vitamin B12 is not found in vegetables.

The Research Institute of the McGill University Health Centre (The RI MUHC) is a world-renowned biomedical and health-care hospital research centre. Research is organized by eleven research axes. Located in Montreal, Quebec, Canada, the Institute is the research arm of the McGill University Health Centre (MUHC) affiliated with the Faculty of Medicine at McGill University. The Institute supports over 600 researchers, over 1,200 graduate students and post-docs and fellows devoted to a broad spectrum of fundamental and clinical research. Over 1,800 clinical research studies are conducted within our hospitals each year. The Research Institute of the MUHC is supported in part by the Fonds de recherche du Québec – Santé (FRQS). www.muhc.ca/research/

Founded in Montreal, Que., in 1821, McGill University is Canada’s leading post-secondary institution. It has two campuses, 11 faculties, 11 professional schools, 300 programs of study and more than 37,000 students, including 8,300 graduate students. McGill attracts students from over 150 countries around the world, with more than 7,200 international students making up 20 per cent of the student body. Almost half of McGill students claim a first language other than English, including more than 6,200 francophones. www.mcgill.ca

The Canadian Institutes of Health Research (CIHR) is the Government of Canada’s health research investment agency. CIHR’s mission is to create new scientific knowledge and to enable its translation into improved health, more effective health services and products, and a strengthened Canadian health care system. Composed of 13 Institutes, CIHR provides leadership and support to more than 14,100 health researchers and trainees across Canada. www.cihr-irsc.gc.ca