A UC San Francisco-led team of scientists has discovered that a gene mutation found in some bladder cancers is indicative of low-risk tumors that are unlikely to recur or progress after surgery.

The finding could help doctors spare many patients from uncomfortable, expensive follow-up tests. 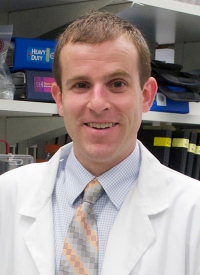 The study, reported online in the journal Nature Genetics on Oct. 13 offers a glimpse into the potential of precision medicine, which aims to use genetic information to make an accurate analysis of an individual’s disease and target it with precise therapy.

The fifth most common malignancy in the U.S., bladder cancers claim about 15,000 lives each year.

A majority of bladder cancers known as papillary tumors can be successfully treated with surgery, but about 20 percent recur and invade the muscle wall of the bladder or spread to nearby organs and lymph nodes. Thus far, physicians have not had an accurate method to determine which papillary tumors are potentially lethal, so most patients undergo frequent endoscopic examinations of their bladder using a technique known as cystoscopy to look for signs of recurrence.

Homing In on the STAG2 Gene

In 2011, while at Georgetown University School of Medicine, David A. Solomon, MD, PhD, his mentor Todd Waldman, MD, PhD, and colleagues published research in Science showing that mutations that deactivate a gene called STAG2 – which regulates the separation of duplicate chromosomes during cell division – are present in a range of human cancers.

In the top image, STAG2 is expressed in a robust and orderly fashion in normal

bladder tissue. In the bottom image, the gene shows reduced expression and

Now a UCSF resident in anatomic pathology in the Department of Pathology, Solomon built on that work for the new Nature Genetics study.

Along with colleagues C. David James, PhD, Tomoko Ozawa, MD, PhD, and Joanna J. Phillips, MD, PhD, all of UCSF’s Department of Neurological Surgery, and other scientists from around the U.S. and from Germany, Solomon showed that inactivating mutations in the STAG2 gene are present in 36 percent of noninvasive papillary bladder tumors, but in only 16 percent of the recurrent, invasive variety.

“Our data show that STAG2 is one of the earliest initiating gene mutations in 30 to 40 percent of superficial or ‘papillary-type’ bladder tumors, and that these tumors are unlikely to recur,” said Solomon, lead author on the study.

In the first stage of the study, the researchers tested 2,214 human tumors of many types for STAG2 inactivation and discovered that bladder cancer has the highest frequency of STAG2 loss. Homing in further, they found that STAG2 mutations were particularly abundant in low-risk cancers, suggesting that testing a tumor’s STAG2 status after surgery could help guide clinical care, said Waldman, senior author of the Nature Genetics article.

“A positive STAG2 mutation could mean that patient is at lower risk of recurrence,” Waldman said.

The vast majority of cancer cells have an incorrect number of chromosomes, a phenomenon known as aneuploidy. Because STAG2 is crucial in ensuring that dividing cells receive their proper chromosomal allocation, the gene has been implicated in causing aneuploidy during the formation of tumors, “an important and complicated issue that will only be definitively resolved through additional research,” said Waldman. “But at least in bladder cancer, STAG2 mutations appear to offer some good news.”