Non-dominant hand vital to the evolution of the thumb 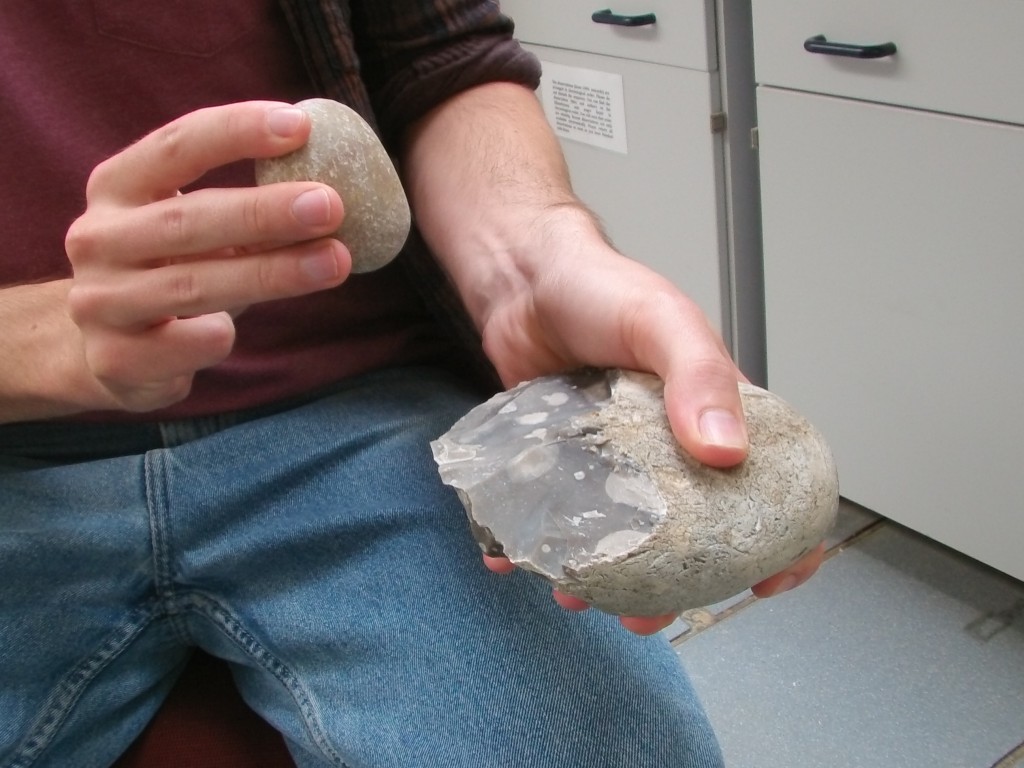 Picture by University of Kent.

In the largest experiment ever undertaken into the manipulative pressures experienced by the hand during stone tool production, biological anthropologist’s analysed the manipulative forces and frequency of use experienced by the thumb and fingers on the non-dominant hand during a series of stone tool production sequences that replicated early tool forms.

It is well known that one of the main distinctive features between humans and our closest evolutionary cousins, the great apes, is the morphology and manipulative capabilities of their hands. Key to this is the substantially larger, stronger and more robust thumb displayed by humans with such a thumb allowing humans to forcefully and yet dexterously manipulate objects within the hand, a trait first thought to have evolved alongside the earliest stone tool use between 2.6 – 1.4 million years ago.

Until now however, the evolutionary pressures thought to have selected for this robust thumb anatomy have focused upon the use and production of stone tools with the dominant hand, with the influence exerted by the non-dominant hand having largely been overlooked, despite its vital role in the securing and repositioning of stone nodules (cores/nodules are the piece of raw material from which stone tools are produced).

In the research, PhD student Alastair Key and his research associate Christopher Dunmore, of the University’s School of Anthropology and Conservation, showed that the production of stone tools requires the thumb on the non-dominant hand to be significantly stronger and more robust than the fingers.

Their results, published in the Journal of Human Evolution, demonstrated that the thumb on the non-dominant hand was not only required to exert and resist significantly more force than the fingers when manipulating stone cores, but that it was also recruited significantly more often. This means that our earliest stone tool producing ancestors were likely to have experienced similar recruitment levels, with those individuals displaying a stronger, more robust thumb being more capable stone tool producers and thus having an evolutionary advantage.