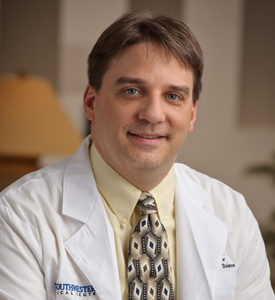 UT Southwestern researchers identified how a combination of signaling molecules inhibits the growth of breast cancer cells, improving clinical outcomes for some subtypes of breast cancers.

The combination − the steroid hormone estradiol and the proinflammatory cytokine tumor necrosis factor alpha (TNFα) − act to expand the number of sites where estrogen receptor alpha (ERα) can bind to the genome in breast cancer cells. The new sites of ERα binding turn new genes on and off, which alters the growth response of the breast cancer cells, inhibiting their growth and improving clinical outcomes in certain cases.

The newly identified gene set can be used as a biomarker that can help physicians determine who is at risk and how they might react to certain therapies.

“Our study uncovered the molecular mechanisms that alter the expression of the new set of genes in response to estradiol and TNFα, and identified potential target genes for future therapy,” said senior author Dr. W. Lee Kraus, Director of the Cecil H. and Ida Green Center for Reproductive Biology Sciences, Professor of Obstetrics and Gynecology, and a member of the Harold C. Simmons Comprehensive Cancer Center. “Since the altered pattern of gene expression can predict outcomes in breast cancer, there are important diagnostic and prognostic implications.”

The findings are published online and in the journal Molecular Cell.

Approximately 12.3 percent of women will be diagnosed with breast cancer at some point during their lifetime, and nearly 2.9 million women are living with breast cancer in the United States, according to statistics from the National Cancer Institute (NCI). About 232,670 new cases were reported in 2014, constituting about 14 percent of all new cancer cases. About 40,000 deaths were attributed to breast cancer in 2014.

Cancer cells release signals that can prompt the body to respond with an inflammatory response. As part of this response, TNFα is released and can impact the growth of the cancer cells. Previous studies suggested that inflammation might exacerbate the cancer, while the present study suggests that, in some cases, it might actually promote a better outcome. The study revealed that, when present together, TNFα and estradiol cause ERα, a nuclear transcription factor that is present in about two-thirds of breast cancers (so-called ER+ cancers), to bind to new sites in the genome where the protein does not bind with either TNFα or estradiol alone. These new ERα binding sites allow altered gene expression and, for some subtypes of breast cancers, inhibit the growth of cancer cells.

Since the effect only happens when the two are combined, researchers can use the altered gene expression patterns as an indicator that both agents are at work in the cancer and as a biomarker that may help determine who might be more at risk and how they might react to therapy, said Dr. Kraus, Professor and Vice Chair for Basic Sciences in Obstetrics and Gynecology, Professor of Pharmacology, and holder of the Cecil H. and Ida Green Distinguished Chair in Reproductive Biology Sciences.

The mission of the Cecil H. and Ida Green Center for Reproductive Biology Sciences, endowed by Cecil and Ida Green in 1974, is to promote and support cutting-edge, integrative, and collaborative basic research in female reproductive biology, with a focus on signaling, gene regulation, and genome function.

UT Southwestern’s Harold C. Simmons Comprehensive Cancer Center is the only National Cancer Institute-designated cancer center in North Texas and one of just 68 NCI-designated cancer centers in the nation. The Simmons Cancer Center includes 13 major cancer care programs with a focus on treating the whole individual with innovative treatments, while fostering groundbreaking research that has the potential to improve patient care and prevention of cancer worldwide. In addition, the Center’s education and training programs support and develop the next generation of cancer researchers and clinicians.