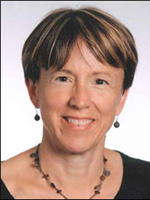 PITTSBURGH—The list of genes identified with autism spectrum disorder (ASD) by deep DNA sequencing has expanded from nine to 33, according to a new study by an international research team led by the Autism Sequencing Consortium (ASC), including Carnegie Mellon University’s Kathryn Roeder (right) and the University of Pittsburgh’s Bernie Devlin (far right).

Published today in Nature, the study examined data on several types of rare, genetic differences in more than 14,000 DNA samples from parents, affected children and unrelated individuals. It is the largest sample to date, and provides evidence that small differences in some of possibly 1,000 risk genes contribute to autism. In addition to increasing the number of definitive autism genes almost fourfold, the team pinpointed more than 70 other likely ASD genes.

The genes identified involve critical brain processes, apparently affecting the formation of nerve networks and altering the function of synapses, the crucial structures that allow brain cells to communicate.

“This makes sense because typical development of brain cells require intricate coordination among thousands of genes and appropriate communication between cells to ensure development of the brain – the most complicated organ in the human body,” said Roeder, professor in CMU’s Department of Statistics and the Lane Center for Computational Biology, and a leading expert on statistical genomics and the genetic basis of complex disease.

The genetic findings also support the influential “Frontal-Posterior Underconnectivity Theory of Autism,” in which CMU’s Marcel Just and Pitt’s Nancy Minshew first proposed and explained that the synchronization of the activation between frontal and posterior brain areas is lower in autism.

For the current study, the Roeder/Devlin team, which included faculty and students spanning statistics, psychiatry and computational biology, developed the statistical tools that enabled the researchers to assess the effects of both inherited differences and those that happen spontaneously in the sperm and eggs that form human embryos. While small, rare genetic differences in the top 107 genes were found to confer a relatively large jump in a person’s risk for autism, while many more genetic changes in other genes add smaller amounts of risk. By looking at how many times variations occurred in each of the 107 genes, the researchers were able to predict that small differences in about 1,000 genes will eventually be found to increase autism risk.

According to Devlin, professor of psychiatry at Pitt and an adjunct associate professor of statistics at CMU, the next steps for the ASC-led research team are to grow the list of definitive autism genes even more and drill down into exactly what is different about the brain of someone with autism versus more typical development.

“I am confident that the list of autism genes will expand rapidly because there are already many more samples sequenced. What goes awry is a harder question, but the ever increasing list of genes involved will surely provide pieces that could solve the puzzle of autism,” Devlin said.

The study also looked at how genetic mutations affect autism and evaluated the rate of different classes of mutations between girls with ASD and boys with ASD. Feminine genetics somehow protect girls from ASD, so comparing mutations between girls and boys provided a unique analytical perspective and allowed the researchers to estimate the risk associated with different kinds of mutations. Using this approach, the team found mutations that came with a more than 20-fold increase in risk for autism.

“The steps we added to our analysis over past studies provide the most complete theoretical picture to date of how many genetic changes pile up to affect the brains of children with autism,” said Joseph D. Buxbaum, lead author and professor of psychiatry, neuroscience and genetics and genomic sciences at the Icahn School of Medicine at Mount Sinai. “While we have very strong findings in these genetic analyses, newfound genetic discoveries must be moved into molecular, cell and animal studies to realize future benefits for families. A study like this creates an industry for years to come, with labs worldwide checking the brain changes linked to each new genetic finding.”

Carnegie Mellon has been a leader in the study of brain and behavior for more than 50 years. The university has created some of the first cognitive tutors, helped to develop the Jeopardy-winning Watson, founded a groundbreaking doctoral program in neural computation, and completed cutting-edge work in understanding the genetics of autism. Building on its strengths in biology, computer science, psychology, statistics and engineering, CMU recently launched BrainHubSM, a global initiative that focuses on how the structure and activity of the brain give rise to complex behaviors.