Genetics : an "origins code" for DNA

They were able to distinguish three principal categories, reflecting the adaptive capacities of cells. Knowledge of this “origins code” should make it possible to determine any alterations in the event of cancer, or even to develop new tools for gene therapy. These findings, which mainly result from a collaboration between molecular biologists at the Institut de Génétique Humaine (CNRS) and bioinformatics specialists in the Laboratoire Technologie Avancée pour le Génome et la Clinique (TAGC, Inserm/Aix-Marseille Université), are published on 11 November 2015 in Genome Research. 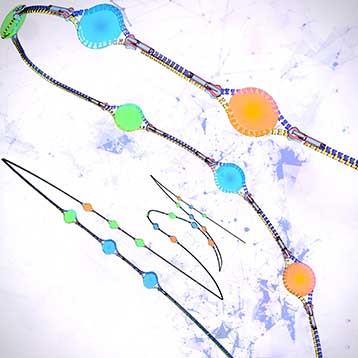 Deciphering the origins code : to initiate its replication, DNA (represented here by a zip) opens up at several sites called replication origins, which exceed 50,000 in the DNA of each cell. These sites are defined by three different code types (featured here in blue, orange and green) that have been deciphered in this study. During replication, each strand of the zip recreates a full zip. The DNA of each cell is thus replicated and shared between two daughter cells.