Credit: Zhanlian Feng
A new study of the growth and operation of nursing homes in Chinese cities finds that the industry, while still small, is surging to meet the country’s overwhelming shift toward an older population. The almost entirely private-sector growth has far outpaced government oversight. 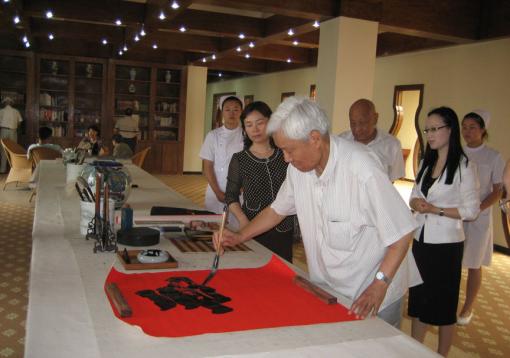 PROVIDENCE, R.I. [Brown University] — A nursing home industry is booming in China as a rapid increase in the proportion of its elderly population forces a nationwide shift from traditional family care to institutional care, according to new research by Brown University gerontologists.

The study, led by Zhanlian Feng, assistant professor of community health, and published online in the Journal of the American Geriatrics Society, is the first systematic documentation of the growth and operation of nursing homes in Chinese cities. The demographics driving the trend, however, are better known: Experts with the U.S. Census Bureau project that China’s over-65 population will rise from 8.3 percent of the population today to 22.6 percent (or 329 million people) in 2040.

Under a National Institutes of Health grant to co-author Vincent Mor, professor of medical science, Feng and colleagues at Brown, Georgia State, and Nanjing University found that the number of nursing homes in Nanjing grew from only three in 1980 to more than 140 in 2009. In Tianjin, where there are 136 nursing homes, only 11 existed before 1990. More than half of the nursing homes in the capital Beijing opened after 2000.

“Institution-based long-term care has been very rare in the country in the past,” said Feng. “Even now it is still rare, but we’ve seen explosive growth, which is quite a phenomenon in a country where for thousands of years people have relied almost exclusively on the family for old age support.”

As homes spring up by the score, Feng said, their operation has been subject to very little of the kind of oversight that Western nations realized decades ago was necessary — often the hard way. Part of the reason is that to this point the government is largely uninvolved in financing the sector’s growth spurt.

The government encourages development of long-term care facilities in the private sector, Feng said, but its provision of limited financial subsidies for construction depends on the availability of local resources.

In what has traditionally been a command economy, more than three-fifths of 1,208 nursing homes in seven cities around the country are privately owned, and in Nanjing, more than three-quarters of the homes built in the last decade are private. Across the city, 80 percent of nursing home revenue, on average, comes from private sources. The researchers there also found that patients in privately owned nursing homes tend to be sicker than those in government-owned homes.

Decades ago in the United States, nursing homes were largely unregulated until the public became increasingly horrified by stories of abuse, neglect, and otherwise substandard care, Feng said. After several waves of regulation, most notably passage of the national nursing home reform legislation as part of the Omnibus Budget Reconciliation Act of 1987, conditions improved.

“It’s quite similar in many ways to what nursing homes were like in this country, back 40 or 50 years ago, before Medicare and Medicaid,” Feng said. “In the beginning, regulation was lax. Chinese policymakers can avoid these mistakes. They don’t have to repeat them.”

As it stood in Nanjing in 2009, however, only 31 percent of nursing homes employed a doctor and only 29 percent employed a nurse. The top administrator had a college education in only four in 10 homes. More than half the staff in the city’s homes, on average, are largely untrained rural migrant workers, Feng said.

“The most urgent thing for China is to plan carefully,” he said. “When I talk to officials I get the impression that officials know there is a huge challenge and that the aging wave is coming. So they say, ‘Let’s build more beds first. Quality? Problems? We’ll worry about that later.’ That worries me.”

Feng said the best way to meet the population’s fast-growing needs, but to meet them safely, is for the government to focus on facilities where problems are most likely to occur. That means gathering more data.

“I would recommend the government mandate the reporting of some basic facility-level information, as we’ve collected from facilities in Nanjing and Tianjin, on a regular basis,” he said. “Then the government will be in a better position to implement targeted interventions such as focusing monitoring efforts on a small number of facilities that house much sicker than average patients yet have much lower than average staffing levels.”

The National Institutes of Health supported the study through the Fogarty International Center.