ANN ARBOR, Mich. –Middle-aged adults with diabetes are much more likely to develop age-related conditions than their counterparts who don’t have diabetes, according to a new study by the University of Michigan Health System and VA Ann Arbor Healthcare System. 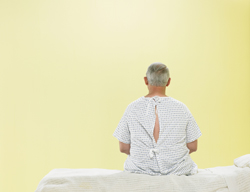 Adults between 51 and 70 with diabetes developed age-related ailments like cognitive impairment, incontinence, falls, dizziness, vision impairment and pain at a faster rate than those without diabetes, the study found. Results were published in the March issue of the Journal of General Internal Medicine.

“Our findings suggest that middle age adults with diabetes start to accumulate these age-related problems,” says lead author Christine Cigolle, M.D., M.P.H., an assistant professor of family medicine and internal medicine at the U-M Medical School and research scientist at the VA. “Because diabetes affects multiple organ systems, it has the potential to contribute significantly to the development of a number of issues that we associate with aging.”

For adults aged 51-60 with diabetes, the odds of developing new geriatric conditions were nearly double those of their counterparts who didn’t have diabetes, the researchers found. By the time people with and without diabetes reach 80, the overall effects of aging and impact of other diseases start to reduce the disparities between the two groups.

The research was based on nationally representative data from the U-M Health and Retirement Study.

“The findings suggest that adults with diabetes should be monitored for the development of these conditions beginning at a younger age than we previously thought,” says Cigolle, also a research assistant professor at the U-M Institute of Gerontology.

“If we know to start looking for these conditions earlier, we can manage and treat them more effectively,” she adds.