Nursing homes in the United States are shrinking and their residents are becoming proportionately more black, more Hispanic, more Asian, and less white, according to a new study by Brown University researchers.
An old disparity As the nation ages, the proportion of white elderly in nursing homes declines while the minority proportion increases. Whites, having greater economic resources, may be finding better alternatives. Credit: Zhanliang Feng/Brown University

The nationwide trend, reflected in metropolitan areas from New York to Los Angeles, results from changing demographics and disparities in what people can afford. The study is published in the July edition of Health Affairs.

At first blush the analysis, published July 7 in the journal Health Affairs, suggests that elderly blacks, Hispanics, and Asians are gaining greater access to nursing home care. But the growing proportion of minorities in nursing homes is coming about partly because they do not have the same access to more desirable forms of care as wealthier whites do, said the study’s lead author Zhanlian Feng, assistant professor of community health in the Warren Alpert Medical School of Brown University.

Zhanlian Feng
As policymakers “rebalance” elder care, they should account for disparities. If elderly whites are using more desirable alternatives, policy may need to promote those alternatives for minority elders too.
Credit: David Orenstein/Brown University“Seemingly, we are closing the gap in terms of minority access to nursing home beds, but I don’t think that is something to celebrate,” Feng said. “They are really the last resort. Most elders would rather stay in their homes, or some place like home, but not a nursing home unless they have to.”

Prior research has shown that the nursing homes in predominately minority areas are often of lower quality and are more likely to close, while assisted living facilities are more likely to be built in areas where residents have high incomes. The result, reflected in the figures in the new Health Affairs paper, is a disparity that plays out not only economically and geographically, but also racially, Feng said.

“We know those alternatives are not equally available, accessible, or affordable to everybody, certainly not to many minority elders,” he said.

As policymakers look to “rebalance” elder care from nursing homes to other forms of care, for instance with shifts in Medicaid funding to support home and community-based services, they should account for these disparities, Feng said. As it is, whites are clearly more likely to be using more desirable alternatives; more concerted efforts may be required to promote minority elders’ use of them too, he said.

“Rebalancing is a recognition of most people’s preferences for long-term care,” Feng said. “For that effort to be successful you have to consider who is using what.”

To determine the figures, Feng and his co-authors used the federally mandated Minimum Data Set, which tracks the population of nursing home users and assesses their care needs on a routine basis, because they receive substantial Medicare and Medicaid funding. Similar data is not available for other kinds of elder care, which is predominantly paid for with private insurance dollars. 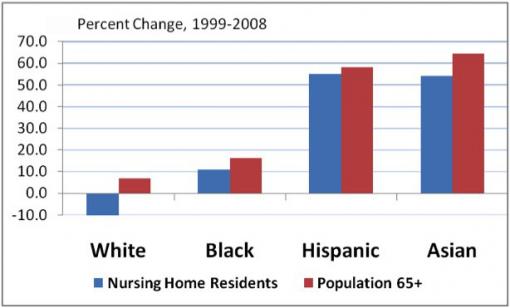 One way Feng and his co-authors have quantified the disparity in eldercare is by grouping metropolitan areas into quartiles based on the proportion of whites, blacks, Hispanics or Asians 65 or older in each area. The researchers found that the representation of blacks, Hispanics and Asians in nursing homes increased as their share of elderly in the total population increased. That correlation did not hold for whites, who did not appear to be obliged to choose nursing homes as they age.

With different rates in different cities, the challenge facing policymakers is not only national, but also local, the researchers said.

“Efforts to reduce disparities should target both communities and facilities with high concentrations of minority residents,” they wrote in Health Affairs.

The National Institute on Aging supported the research.