WIXOM, Mich. — As the United States continues to proportionately “get older,” more people are looking for ways to prolong their youth, age with dignity, maintain their health, and overall, embrace aging.

Trailer for “Embrace of Aging,” a seven-part series airing Sundays on Detroit Public Television that explores the personal stories of men at various ages and stages of their lives.

Ten-time Michigan Emmy award-winning director/producer Keith Famie seeks to highlight some of these methods in his documentary series, The Embrace of Aging, beginning with The Male Perspective of Growing Old. It airs Sundays on Detroit Public Television WTVS Channel 56 at 6:30 p.m. The seven-part series concludes Nov.  24.

The Male Perspective of Growing Old follows the latest progressive teachings from well-known medical universities while showcasing the advice of health gurus, spiritual leaders, psychologists and men of all walks of life from vastly different environments, all facing the inevitability of growing old.

The series focuses on topics ranging from heart disease and prostate cancer to diabetes and Alzheimer’s disease to arthritis and the importance of exercise. The Male Perspective of Growing Old also follows the personal stories of men at various ages and stages of their lives.

Ken Dychtwald, Ph.D., author and founder of ‘Age Wave’ (and more than twelve books on aging and baby boomers) and John Gray, Ph.D., author of “Men Are From Mars, Women Are From Venus,” talks us through a variety of topics as they relate to men and aging. 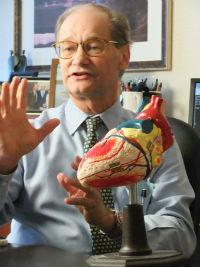 “In this film, we won’t be able to cure cancer, but we will definitely have an impact on the importance of health for today’s man. Whatever age we hope menwill say, ‘I now understand what I need to do to live a healthier and longer life for myself and the ones I love,’” said Famie.

“We’ll attempt to find answers to the most persistent issues men have with aging in hopes that men, no matter what stage of life they are in, can learn from the men featured in this film and perhaps add many years to their own lives.”

For example, Drew Nieporent, business partner of Robert DeNiro of the famed Tribeca Grill in New York, speaks candidly about his battle with weight, and the concerns of his doctors, while maintaining leadership of some of New York’s most celebrated restaurants.

Steve Schirripa, better known to many as Bobby ‘Bacala’ Baccalieri of The Sopranos, hosted a hilariously frank discussion with Nieporent on getting older during a “guys’ dinner.”

A terminal prostate cancer patient who is a Vietnam veteran whose exposure to Agent Orange may cost him his life, shares a personal story of how he copes with his inevitable, premature passing. Also, national radio personality Dick Purtan talks openly about his fight with prostate cancer.

Alzheimer’s disease discussions include a chief neurologist from ProMedica Health Systems in Toledo and the Goerlich Center for Alzheimer’s on the campus of Flower Hospital in Toledo, as well as Dr. Gary Dunbar, John G. Kulhavi Professor Neuroscience Program and Brain Research and Integrative Neuroscience Center at Central Michigan University, who shares with us his cutting-edge research into the causes and cures of neurodegenerative diseases.

This takes us into a discussion about the adage of ‘Use It or Lose It.’ We learn that tango dancing and other activities may offer a boost in brainpower that could offset the declines that come with old age.

On the other end of the spectrum, the series demonstrates the possibility of men’s longevity filming areas known as the “Blue Zones.” These “Blue Zones,” such as Sardinia, Italy has proven to be one environment where men live healthy into their 80s and 100s with very little medication and remain active right to the end.

A director of the University of Michigan Frankel Cardiovascular Center Dr. Kim A. Eagle and physician for late football legend Bo Schembechler, delves deeply into heart care for men. We see Coach Schembechler reflect about his first heart attack. Dr. Eagle talks us through a simulated heart attack with a 60-year old man.

Kevin Mains, clinical psychologist, opens up his personal life about his battle with bladder cancer and losing his wife to endometrial cancer.

Famie filmed with 100 senior softball players who gather twice a week in Warren, Mich., vying against one another in a very competitive environment. Viewers will see that these 70-to 90-year-olds hold nothing back.

The series takes you on a journey to a special ‘boys’ trip to Jackson Hole, Wyo. referred to as “Manuary” to gain insight into the importance of guys spending time together through an “out West” get-away. The film also will touch on the importance of “man caves.”

“The Male Perspective of Growing Old series is sure to be ‘embraced’ by public television viewers, many of whom are well into their own aging process. The series is upbeat, full of good information and very positive,” said Jeff Forster, executive vice president of production for Detroit Public TV.