Neutrophil granulocytes comprise important defences for the immune system. When pathogenic bacteria penetrate the body, they are the first on the scene to mobilise other immune cells via signal molecules, thereby containing the risk. To this end, they release serine proteases – enzymes that cut up other proteins to activate signal molecules. Scientists at the Max Planck Institute of Neurobiology in Martinsried have now discovered a new serine protease: neutrophil serine protease 4, or NSP4. This enzyme could provide a new target for the treatment of diseases that involve an overactive immune system, such as rheumatoid arthritis. 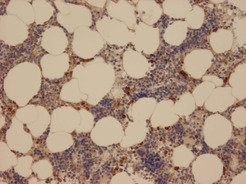 diverse cells and mediators. For example, neutrophil granulocytes (a group of specialized white blood cells) react to bacteria by releasing substances called serine proteases. These enzymes are able to activate signal molecules, such as the chemokines, by cleaving them at a specific position on the molecule. The active signal molecules then guide other immune cells to the focus of inflammation in order to destroy the pathogens.

A research team led by Dieter Jenne at the Max Planck Institute of Neurobiology in Martinsried has come across a previously unknown protease in humans: neutrophil serine protease 4, or NSP4. “The special thing about this enzyme is that it cuts proteins that have the amino acid arginine at a particular point”, says Dieter Jenne, research group leader at the Martinsried-based Institute. “This is where NSP4 differs from the other three known neutrophil serine proteases, which are similar in molecular structure, but have a different recognition motif.” The scientists may be able to harness this difference to develop an active substance that specifically inhibits NSP4, thereby reducing the immune reaction.

However, serine protease activity comes at a cost. The enzymes not only heal inflammations, but sometimes cause them in the first place. If too many immune cells are activated, they can use their arsenal of aggressive chemical weapons against the body’s own tissues. A number of chronic inflammatory diseases are based on precisely this effect. As a result, scientists are searching for substances that can block the neutrophil proteases. To date, however, none of the substances tested have been developed into effective drugs.

“So far, we don’t know the identity of the NSP4 substrate, but we assume they must be signal molecules”, says Dieter Jenne. Activated chemokines can recruit a vast number of neutrophils, and their sheer quantity alone is enough to cause tissue damage. “Proteases sometimes act as accelerants and can even trigger a chronic inflammation quite independently of bacterial intruders. If we dampened down the defences, we could counteract this effect”, explains the scientist.

In terms of evolutionary history, NSP4 is the oldest of the four known neutrophil serine proteases. Using gene sequences, scientists have shown that the enzyme has hardly changed through hundreds of millions of years of evolution from bony fish to humans. “That would indicate that NSP4 regulates a fundamental process”, says Dieter Jenne.

The fact that the enzyme remained undiscovered until now is because it occurs at a much lower concentration than the other three proteases. The Max Planck scientists came across it while searching the human genome for genes that encode serine proteases. In the process, they noticed a previously unknown gene sequence. Natascha C. Perera, a member of the Martinsried research group and lead author of the study, managed to produce and examine the enzyme in its active, folded state.

If they are to establish NSP4 in the future as a possible target protein for anti-inflammatory drugs, the scientists must now examine its function in living organisms and discover whether blocking the enzyme has adverse effects. The scientists are working with the company Novartis to answer these questions in laboratory mice. “NSP4 inhibitors could be used in diseases like chronic arthritis or inflammatory skin diseases”, says Dieter Jenne, “but first we have to test the long-term effects of these substances.”