Killing Cancer Through the Immune System 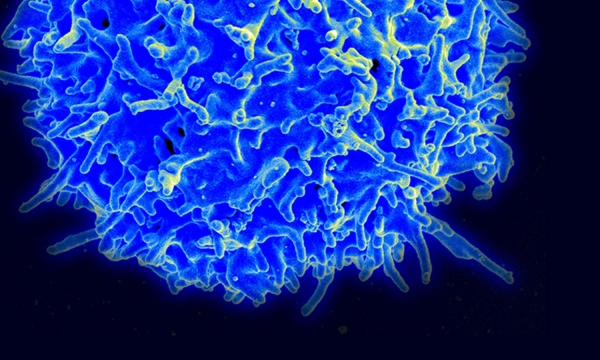 Scanning electron micrograph of a human T-cell from the immune system of a healthy donor. Image credit: National Institute of Allergy and Infectious Diseases (NIAID)

What if the body could heal itself of even the
most aggressive and deadly tumors?

In the span of a few years, the idea has gone from
New Age notion to medical reality.

Researchers are investigating the potential of immunotherapy
to be a powerful, effective and long-lasting solution
to kill cancer.

One of the confounding characteristics of cancer has long been that the body’s usually active patrol against viruses tends to leave deadly cancer cells alone to fester, mutate and spread.

The immune system has this blind spot by design – an immune system that has an ability to attack itself leads to autoimmune diseases, so as protection, it screens out its own tissue. 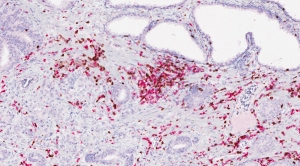 T-cells (stained in pink and brown), which are used by the immune system to fight

Cancer Immunotherapy was chosen by UCSF experts as one of the top research areas for 2014. Read more about what other areas are heating up in the coming year.

For decades, scientists assumed that cancer was beyond the reach of the body’s natural defenses. But after decades of skepticism that the immune system could be trained to root out and eliminate these malignant cells, a new generation of drugs is proving otherwise.

The trick is that this treatment doesn’t work for everybody, and researchers don’t yet understand why. But when it does work, the results have been particularly impressive.

“Although there is a 30-year history of people and institutions trying to develop immunotherapy approaches to cancer, it has only been in the last 10 years that we’ve broken through and have been able to impact cancer using immunotherapy,” said Jeffrey Bluestone, PhD, executive vice chancellor and provost of UC San Francisco.

“I do think that we’re at an inflection point with immunotherapy,” he added. “It will be revolutionary and will impact how we approach cancer for years to come.”

Patricia Hollowell, 80, was diagnosed with melanoma in April 2012.

She had three surgeries in quick succession in her hometown of Grand Junction, Colo., that removed the tumors from her head but didn’t prevent them from coming back and spreading quickly to her neck and lymph nodes. 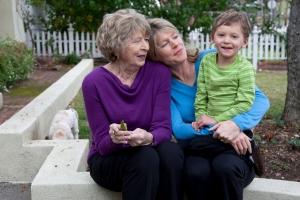 Patricia Hollowell spends time with her daughter Teri and

On the day she returned home from the hospital after the third surgery in June of that year, her husband had a massive stroke and died a week later.

This was not Hollowell’s first bout with cancer, having survived breast and colon cancer 30 years ago. This time, after the failed surgeries and with her cancer spreading quickly, she figured her luck would run out.

Her doctors suggested her only hope might be to join a clinical trial involving new cancer immunotherapy drugs.

Hollowell moved to San Rafael, Calif., to be with her daughter and was accepted into a trial at UCSF under the direction of Adil Daud, MD, director of melanoma clinical research at the UCSF Helen Diller Comprehensive Cancer Center. She began a biweekly IV of an antibody that targets an immune inhibitor called PD-1 in June 2013.

“Within a month, my doctors could see the difference, and I am now tumor-free,” she said. “For me, it’s been an absolute miracle.” 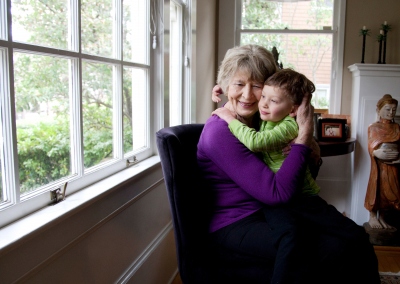 Patricia Hollowell gets a hug from her grandson Cody, 3, at her daughter’s home in

Immunotherapy is “not a sure thing even now, but a positive response is becoming a lot more likely with [the antibody for] PD-1,” Daud said. “Hopefully it will become a building block, and we will add to it and go beyond a 50 percent response rate in the coming years.”

For Hollowell, twice-monthly trips to UCSF for treatment could soon end if her PET scan at the end of February shows no present tumors.

“I feel really good,” she said. “The only bad part is that I’m a little tired, so I rest during the day, but the good part is I’m alive.”

Treating the Patient Instead of the Disease

“For the longest time, people did not believe this was possible,” said Lawrence Fong, MD, associate professor of medicine at UCSF and one of the University’s lead investigators in the expanding use of immunotherapy. 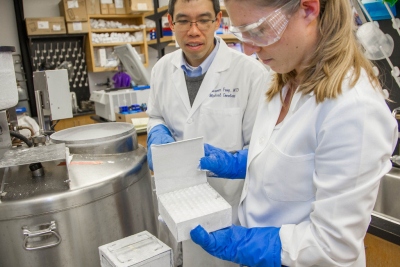 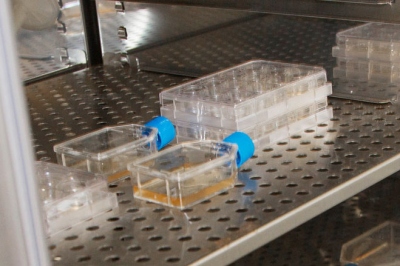 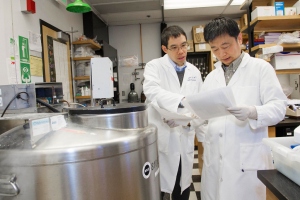 Fong and Yafei Hou, MD, PhD, a specialist in the Fong Lab, discuss which treated patients they plan to assess for immune responses. Photo by Susan Merrell

“Now we can treat cancer by treating the patient instead of the disease,” he said. “That’s the biggest change. We can treat cancer without delivering chemotherapy or radiation to kill the cancer or performing surgery to get rid of the tumor.”

Researchers at UCSF and elsewhere have identified cell receptors, such as CTLA-4 and PD-1, which act as a brake on the immune system, limiting its response.

With the use of antibodies to inhibit these blockade receptors, allowing a more active and vigilant immune system, doctors have seen outstanding responses in patients with metastatic melanoma and lung cancer, both of which are almost always fatal with conventional treatments. Immunotherapy also has been successful in cancers of the bladder, prostate, kidney and bone marrow.

“This was a radical idea: that the body already possesses the ability to defeat cancer, and that medicine’s role was to find a way to allow the body to marshal the healing work it is naturally capable of,” Fong said. “We all believed it could work, but very few would have predicted the 180-degree change that we’ve seen over the last two years.”

Ever since James Allison, PhD, chair of the University of Texas MD Anderson Cancer Center’s Immunology Department, developed the first drug that increased survival for patients with metastatic melanoma – an antibody against CTLA-4 that became ipilimumab and was approved by the U.S. Food and Drug Administration in 2011 – it has been like a door has swung open.

In December, Allison won one of the 2014 Breakthrough Prize in Life Sciences for his groundbreaking discovery.

Indeed, the treatment has been a hot topic at recent cancer conferences and all top pharmaceutical companies are developing immunotherapy drug programs. Science magazine declared immunotherapy its top breakthrough of 2013.

Bluestone’s UCSF lab was the first to show that CTLA-4 can turn off the immune system’s T-cell attack when studying its application to organ transplants and autoimmune disease, a discovery that help paved the way for Allison’s application to cancer.

He pointed to the University’s continuing role in pushing the field ahead, including recent work in cell therapy, which uses stem cells taken from a patient, corrects the gene mutation that causes disease and returns the “gene-corrected” cells to the patient for therapy.

This work is part of UCSF’s commitment to precision medicine, which aims to harness the wealth of genomic, clinical and environmental data from patients to develop more effective and even preventive therapies for human diseases.

“It has been a sea change that has been transformational,” Bluestone said, “not only from the patient’s point of view, but also for our understanding of the relationship between cancer and the immune system and how to treat disease.”

For all its success and promise, researchers still are baffled as to why immunotherapy works for some cancer patients, but not others.

“We have immunotherapy patients who live a long time, and now we can start to figure out why,” he added. “This is exactly what we’re focusing on in the lab now.”

In Fong’s lab, where he often works with Eric Small, MD, deputy director of UCSF Helen Diller Family Comprehensive Cancer Center, his team is studying immune system activity in prostate cancer patients, trying to determine in which cases the immune response is activated and whether T-cells attack the cancer and why.

One of the most promising avenues is to combine immunotherapy treatments. Fong’s lab is now working on several studies regarding immunotherapy drugs, including a combination trial of sipueleucel-T and ipilimumab, which is scheduled to continue for the next couple of years.

For many aggressive, late-stage cancers, immunotherapy won’t replace traditional cancer treatments like chemotherapy, radiation and surgery, but it can be a complementary approach, said Lewis Lanier, PhD, chair of the UCSF Department of Microbiology and Immunology who collaborates with Fong on studying how cancer affects the immune system’s natural responses.

“Chemotherapy can reduce tumors by 95 percent, but if you have just one cell left, it can come back. So you can use [chemotherapy] to buy time, to really shrink the tumor if it’s far advanced, and then use the autoimmune drugs,” Lanier said.

When Robert Bruce, of El Dorado, Calif., was diagnosed in March 2011 with stage-4 melanoma, he already had tumors on his head, lungs, ribs and lymph nodes. 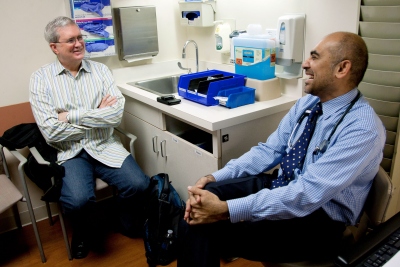 Bruce said his cancer wasn’t a case of his body betraying him, but actually the reverse: “I betrayed my own body.”

“I was a type-A personality, always stressed, and stress – as we all know now – is one of the biggest inhibitors to a healthy immune system,” he said. “And, I’d always been one to go out to into the sun and tan. My daughter would say, ‘Daddy, put on sunscreen,’ and I would say, ‘No, it’s just skin cancer. If something happens, they could just cut it out.’ I was an idiot.”

By the time his wife noticed a nasty-looking mole on his back and persuaded him to show it to his doctor, the cancer had metastasized throughout his whole body.

Bruce endured a brutal round of biochemotherapy, a combination of traditional chemotherapy with immunotherapy. The treatment didn’t seem to make a difference, and doctors gave him six to nine months to live. 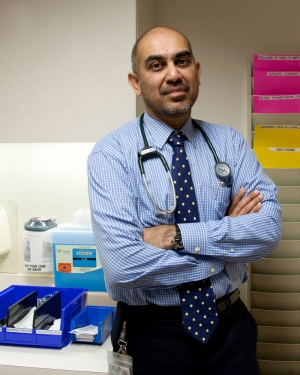 He began reading about a new generation of promising immune response drugs and was accepted for Daud’s trial of the PD-1 antibody at UCSF.

“At eight weeks, I got my first scan, and it showed 20 to 30 percent reduction in my tumor load,” Bruce said. “After almost a year of bad, bad stuff with no good news ever, all of a sudden, they were shrinking.”

His muscles and bones ache and hurt from the treatment, but compared to the debilitating biochemotherapy, Bruce said, “this has been a piece of cake.”

Every two weeks he watches his tumors decrease, and now they are virtually nonexistent.

“I feel like a kid on Christmas morning,” he said. “I’m 60 years old, and I was already looking at what I was going to miss out on – the grandkids, all those kinds of things.

“I’ve prayed about this, and initially it wasn’t just for a cure, but I asked for peace and for hope. What any cancer patient asks for is really that hope, that if this drug doesn’t do it, maybe it will keep me here long enough to find the next drug that will.”