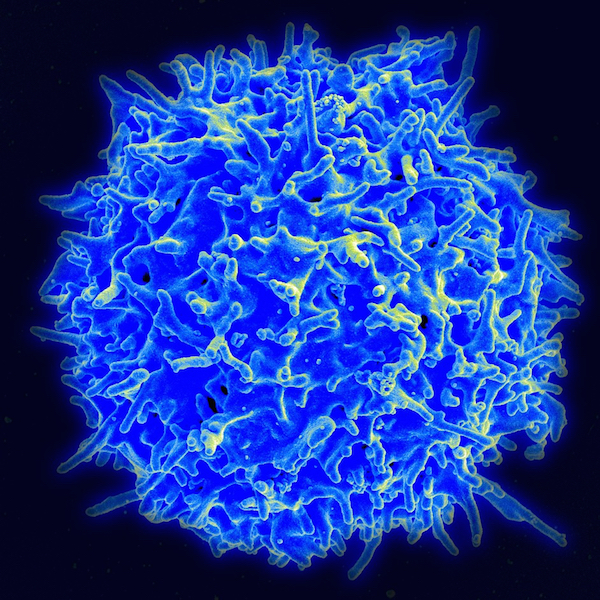 Their job is to kill infected cells so that the viruses inside cannot replicate and spread. But often the force of their attack wanes during a chronic infection, as they become less effective at finding and destroying their targets – a state known as T cell exhaustion. T cells that target cancer cells for destruction become exhausted too, weakening the body’s fight against a tumor. Howard Hughes Medical Institute scientists have discovered that this decline in activity is an essential coping mechanism that actually allows the T cells to persist in the face of a chronic infection.

Understanding the triggers and consequences of T cell exhaustion could help scientists fine tune therapies that aim to treat chronic infection or cancer by reactivating an immune response, says Susan Kaech, an HHMI Early Career Scientist at Yale University who led the study. Kaech and her colleagues found that in mice with chronic viral infections, T cells specialized against that virus died when they could not enter an exhausted state. They reported their findings in the November 13, 2014, issue of the journal Immunity.

“We’d been thinking that T-cell exhaustion was a really bad thing,” says Kaech. “These cells don’t function very well. They don’t get rid of virus; they don’t get rid of tumors. But now we’re starting to appreciate that it’s an important process that is also helping to maintain this precious pool of T cells that recognize the virus or tumor.”

Researchers already suspected that T cells don’t just putter out because they are weary. As a virus spreads, a prolonged immune response can destroy so many infected cells that it damages the body’s own tissues. “There’s a balance,” Kaech says. “Your T cells are being kept in check to prevent them from causing excessive tissue damage.”

Kaech’s lab has found that during the first few weeks of a chronic viral infection, T cells that are specialized to defend the body against that virus become less functional. They stop producing some of the proteins they use to kill their targets, and they produce inhibitory surface proteins that suppress their own ability to recognize infected cells. The best studied of these inhibitory proteins is called programmed cell death protein 1, or PD-1.

PD-1 blocks signaling so a T cell cannot respond to the snippet of protein – the antigen – that normally targets another cell for destruction by signaling that it is infected or cancerous. “PD-1 puts the brakes on T cells, preventing the normal response,” Kaech says. “This has been a very exciting area for therapeutics, because if we can figure out what these brakes are, we may be able to find ways to reactivate the T cells so they can better fight a chronic viral infection or a tumor.”

Recently, the FDA approved the anti-PD-1 antibody, nivolumab, for the treatment of melanoma. This comes after FDA approval last September of pembrolizumab — a drug that blocks PD-1 — as a treatment for melanoma. Ipilimumab, yet another immunotherapy approved for the treatment of melanoma, works by blocking another inhibitory protein that dampens the T cell response, CTLA4. “A large number of people are receiving great benefits from these drugs,” Kaech says. “By giving these drugs, you’re removing that brake and allowing the T cells to attack the tumor.” Blocking PD-1 has also been found to improve the immune system’s ability to fight viral infections in mice, she adds.

In the current study, Kaech and her colleagues investigated the signaling pathways that mediate PD-1’s effects. They found during chronic stimulation, T cells lose their ability to signal through a pathway that drives their growth, proliferation and production of proteins they use to communicate with other immune cells. “They need this pathway on to be potent anti-viral or anti-tumor cells,” Kaech says. In particular, they found reduced activity among the signaling proteins known as AKT and mTOR.

They found that the reduction in AKT activity allowed another protein, FOXO1, to become more active. FOXO1 helps cells respond to a variety of stresses. In T cells, they found, that includes triggering the production of factors that promote T cell exhaustion, including PD-1. Interfering with that trigger, they thought, could improve T cell function. “We thought if we got rid of this factor that was promoting T cell exhaustion and PD-1 expression, we would make the T cells better killers,” Kaech says. “What we found was the exact opposite.”

When they eliminated the FOXO1 gene in mice, T cells did produce less PD-1 than T cells with functional FOXO1. But the cells without FOXO1 were not better killers. In fact, Kaech says, they died. They appeared unable to endure the prolonged presence of the antigen they were primed to fight. “That really made us think about this differently,” she says.

Kaech concluded that the exhausted state doesn’t just fend of excessive immune-induced tissue damage – it allows the T cells to persist. “They have to turn down their response or else they’ll get over-activated, and we think that’s causing these cells to deteriorate and die,” she says. For the host, impaired T cells are better than no T cells. “Even though the cells are less functional in this exhausted state, they’re still applying some immune pressure,” Kaech says. “If they didn’t persist we’d be in a much worse situation. We would lose all the T cells that are specific for the viruses we’re chronically infected with.”

Kaech says drugs that modulate FOXO1 could help reinvigorate the immune response in patients with cancer or chronic infections, but her team’s findings suggest that such therapies will need to be finely tuned. “There may be a sweet point where you can stop the cells from fully entering the exhausted state – where you suppress PD-1, but not so much that the cells die,” she says.