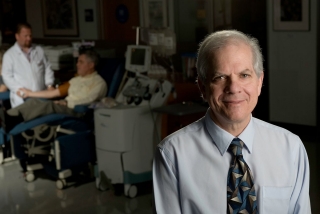 Edgar Engleman and his colleagues found in a study of mice that a T cell could be primed to attack and eliminate cancer cells.
Steve Fisch

A type of immune cell can be primed to attack and eliminate various kinds of malignant cancers in mice, according to a study by Stanford University School of Medicine researchers.

The researchers studied mouse models of melanoma, pancreatic, breast and lung cancer and found that their technique could eliminate not only primary tumors, but also distant metastases throughout the body.

“The potency is impressive,” said Edgar Engleman, MD, PhD, a professor of pathology and of medicine at Stanford and the senior author of the study. “You actually see tumor eradication.”

The procedure described in the paper has not yet been applied to humans, but initial in vitro work with human cancer cells indicates a similar immune-cell response. Unlike many potential treatments that apply to specific cancers, this method could target a wide range of solid tumors, the researchers said.

A paper describing the findings were published online April 29 in Nature. The lead author is postdoctoral scholar Yaron Carmi, PhD.

The process appears to rely on the same mechanism that causes animals’ bodies to reject organ transplants, the researchers said. In both cases, antibodies — molecules that detect foreign substances in the body — kick off the immune response. They bind to proteins from the foreign tissue and, through signaling cells, alert T cells, the immune system’s SWAT team. When T cells encounter the “unwelcome” tissue, they attack and destroy it.

In the study, the researchers isolated antibodies from mice with resistance to the cancers. When they injected these antibodies, along with chemicals that activated signaling cells called dendritic cells, into cancerous mice, the mice mounted an immune response and remained cancer-free for over a year.

Although scientists know that transplanted tumors will almost always be eliminated by the new host’s T cells, this rejection doesn’t happen right away. Carmi observed no T cell activity for the first week after he injected lab mice with cancer cells from another mouse strain. He did, however, note an increase in the activity of dendritic cells.

Dendritic cells are scavenger cells that present foreign proteins, like those made by viruses and some tumors, to the T cells to alert them to the threat. The researchers showed that antibodies were binding to tumor cells, enabling nearby dendritic cells to ingest them. The dendritic cells then displayed proteins from the ingested tumors on their surface to alert T cells. Once primed to recognize the cancerous tissue, the T cells would multiply and not only attack the tumor, but hunt down any metastatic cells traveling through the body.

Carmi found that both antibodies and dendritic cells are crucial for tumor elimination.

“Within hours after injection, these tumor cells are already coated with antibodies,” said Carmi. If he either disabled the antibodies’ ability to bind to tumors or the dendritic cells’ ability to ingest the tumors, the T cells failed to clear the cancer.

“T cells contain the bullets, but in our system, the antibodies start the whole thing off,” Engleman said.

The next step was to see if these antibodies could activate T cells in the original cancer-afflicted mice. The scientists tested two different mouse strains, each susceptible to a different type of cancer.

T cells contain the bullets, but in our system, the antibodies start the whole thing off.

Cancer cells were injected into the mice, and tumors appeared in them within two weeks. Carmi surgically removed growing tumors from the mice, mixed them in blood plasma from a cancer-free mouse of a different genetic strain, and collected the antibodies that stuck to the tumors. He then added the antibodies, with or without dendritic cells, back to the mice. The residual cancer cells left behind after surgery regrew the tumors within days in all the animals, but those that had received the antibodies and dendritic cells rejected the tumors, which shrank away over the course of several days. The mice had no recurrence of cancer for more than a year.

However, those injected with just the antibodies, not the dendritic cells, failed to mount a T cell response, and they died of the cancer within two weeks.

“We were very frustrated at first when the antibodies alone didn’t work,” said Engleman. In retrospect, he said, it shouldn’t have been a surprise. He explained that tumors not only evade the immune system, they suppress it, rendering dendritic cells within the tumor inoperable.

To reactivate the dendritic cells, Carmi spent over a year trying various factors, eventually hitting upon a combination of the growth factor TNF-alpha and the CD40 binding protein. Adding these dendritic-stimulating factors to the antibodies successfully eliminated six different cancer-forming cell lines — two melanomas, one of which was genetically engineered; lymphoma; breast; lung; and pancreatic cancer — from four strains of mice.

“Yaron was able to show that this combination therapy was extraordinary powerful,” said Engleman. “Pretty much we could eliminate any cancer.”

To confirm that a similar mechanism was present in humans, blood plasma from 10 healthy donors was pooled to collect antibodies against four cancers from patients: two lung and two mesothelioma cancers. The antibodies with the stimulation factors were able to activate the two lung cancer patients’ dendritic cells in vitro. With the cells from the two mesothelioma cancer patients, the antibodies induced T cell proliferation in vitro under the same experimental conditions.

Medical oncologist Holbrook Kohrt, MD, PhD, an assistant professor of medicine at Stanford who was not involved with the study, called the paper “a nice tour de force” and believes the novel therapeutic strategy could utilize the patient’s own immune system to defend against certain cancers. Kohrt oversees numerous clinical trials involving immunotherapy for cancer patients and thinks an important aspect of the technique is its potential to fight different tumor types.

Given that TNF-alpha and CD40 have been used in other clinical trials, Kohrt predicted that developing them into a therapeutic drug would be fairly straightforward.

“I honestly think the most important thing is to see if we can bring this new approach into the clinic,” said Engleman. “That’s where we want to go.”