A really nasty yeast Candida albicans may be such a successful pathogen because of its pragmatic and robust mating strategy.    Credit: Mike Cohea/Brown University 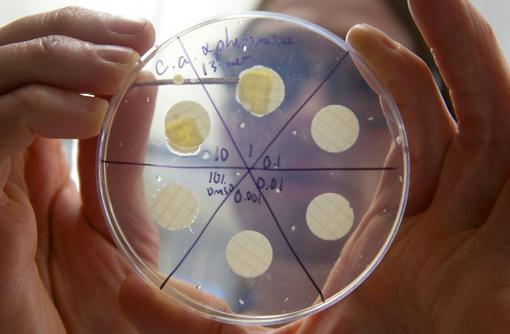 PROVIDENCE, R.I. [Brown University] — The success of a fungal pathogen in becoming a persistent and opportunistic source of infection in human beings may be due to a mating strategy that can best be described as “don’t be too choosy.” A new Brown University study finds that Candida albicans will respond to the pheromones of several different species, not just its own, and if an opposite-sex partner isn’t around, it can switch to same-sex mating. In affairs of DNA exchange — for the yeast has no heart — Candida is exquisitely pragmatic.

When the yeast is not in a sexually active state, the same wide variety of pheromones can inspire it to clump together in tough-to-treat biofilms, said Richard Bennett, assistant professor of biology and co-author of the paper published online in the Proceedings of the National Academy of Sciences.

The surprising finding that Candida albicans is so indiscriminate about pheromones could help in the fight against infections, which can sometimes be deadly for patients with compromised immune systems, Bennett said. The study illuminates both how the yeast may genetically adapt and how it can be induced to form biofilms.

“Sex can potentially generate recombinant forms of the species that may have increased drug resistance or altered pathogenic properties, a theory that we are currently testing,” Bennett said. “Also, there are now direct links between mating and pathogenesis, as pheromone signaling can increase biofilm formation, an important first step in the establishment of many clinical infections.”

Bennett said the experiments were a “first step” to understanding mating signals and conditions in infectious Candida species. The next step is to determine whether other infectious fungi are similarly promiscuous and whether their previously underappreciated propensity for mating is perhaps based on a form of pathogenic peer pressure.

“We speculate that this could be a general advantage for fungi,” he said. “If they sense other species are trying to mate, perhaps they decide they should too.”

Another question, Bennett says, is whether the fungi could even be similarly receptive to chemical signals emitted by their human hosts.

Bennett and Alby’s research was funded by the National Institutes of Health and the Burroughs Wellcome Fund.